This post can bring a bit of Hawaii to your kitchen. A famous method of traditional Hawaiian cuisine involves cooking a whole pig, along with other foods, in an earthen oven, called an imu, for hours. The food cooked in such an oven is referred to as “Kalua” from the Hawaiian meaning “the hole” - a reference to the imu. This was often done for celebrations, now referred to as luaus. Obviously most people do not have the ability or space to construct an imu at home, or to cook a whole pig. But there are ways to approximate the finished product at home.

First, I will explain how kalua pig is prepared in the traditional manner. You start with a whole dressed pig, meaning hair removed, gutted but with head and skin on. Then you dig a pit large enough to contain the pig and whatever else you are cooking, generally about 2-3 feet deep. You build a fire of kindling wood and burn it down to coals and use the fire to heat stones, which, when hot, will be placed inside the pigs cavity to ensure even cooking. When the coals are ready, they are spread around and wet banana stalks, banana leaves and ti leaves are put on top of the coals to generate steam. The pig is placed on top of the leaves with additional leaves placed on top. The entire pig is then covered with wet burlap sacks then a canvas tarp covers the entire pit and is covered over with dirt. Depending on the size of the pig, this takes anywhere from 3 to 6 hours. Other popular items cooked in the imu are duck, fish, taro, breadfruit and sweet potatoes.

Obviously this is not something I expect anyone here would actually do. Here is a much more appropriate method, using available equipment and ingredients that can be made for fewer than 50 people. I have done this recipe both with pork and with duck. It is technically less difficult with pork, but I think the results can be better using duck.

Lay out a sheet of aluminum foil approximately double the size of the pork/duck and lay it on a work surface then place a piece of banana leaf on top of the foil. The banana leaf should stop at least 2 inches from the edge of the foil, but still be large enough to place the entire piece of meat on top. 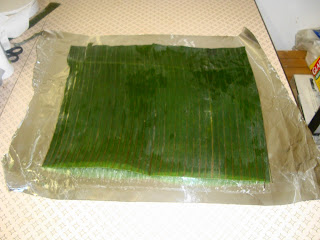 The ends of this banana leaf should probably be trimmed a little to give even more clearance for the foil
Place the pork shoulder or duck on the banana leaf. Season both sides with generous amount of Hawaiian salt and several dashes of liquid smoke. Place another banana leaf on top of the meat and cover with another piece of foil the same size as the first. Crimp the two sheets of foil together, being very careful not to tear the foil or get the banana leaf caught in the crimping. 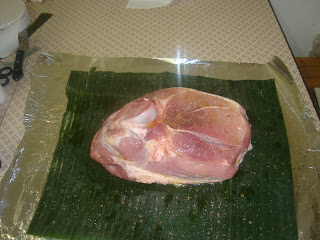 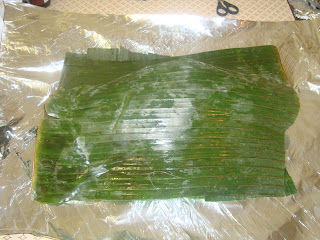 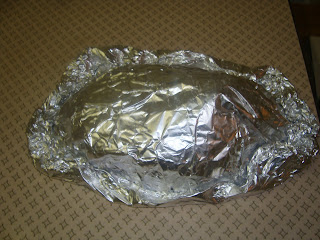 Heavy duty foil that is extra wide is very important for this, because ordinary foil is not wide enough to accommodate a whole duck, and can be problematic even for the pork. Also, regular foil is not sturdy enough to resist tearing, which is very important. Place the package in a large roasting pan filled with at least two inches of water. Cover the roasting pan with more foil and put in a 500 degree oven for about 2 ½ hours. After two hours you may need to add more water as, even though the foil should have sealed in all the water, with the intense heat, it always seems to escape. After 2 ½ hours, turn off the oven but leave the meat in the oven for another hour, or until the oven is cool. If you are using a duck, you may need another 30 minutes with the heat on.

The pork will produce a product something like pulled pork, though maybe a little drier. So this is also a decent method to get close to southern barbeque without a massive smoker and firebox. The only difficulty is much of the pork shoulder I find does not have a lot of fat, so parts of the meat can get a little too dry. 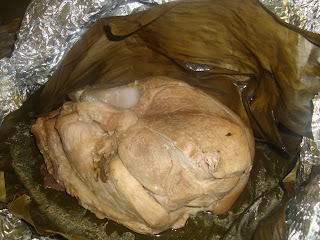 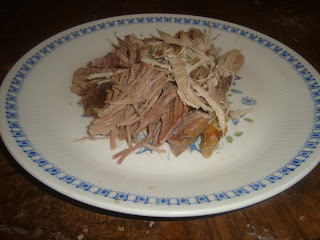 Because the duck is covered with skin and fat, the meat remains moister so, although it is more diffiuclt to prepare for the oven due to its awkward size, I think it tastes better. When the meat is cooled, shred it as you would pulled pork and decide how to use it. An excellent use of the duck is as an hors d’oeuvre. Take a cracker or toast, put on a little goat cheese, some shredded kalua duck and top with a few grains of coarse Hawaiian salt. One of my favourite uses is in risotto, and I will give that recipe in my next post.

This recipes features some unusual items that can be difficult to obtain. Banana leaves are actually a compromise from the original recipe. The proper leaves to use are ti leaves, from the ti plant, indigenous to the South Pacific. It is quite hard to find even in Hawaii where it is in demand, and impossible to find elsewhere. Banana leaves are the closest substitute readily available. Any Asian grocery should have frozen banana leaves. The banana leaves are not to be eaten, but they will impart a delicate flavour to the meat.

With the prominence of gourmet sea salts today, Hawaiian salt is actually available in fine foods and gourmet shops. The salt you will find outside Hawaii may have a darker coloration than what is pictured. I get this salt directly from stores in Hawaii, usually brought back by my parents if I am unable to go myself and for some reason the Hawaiian salt I have seen here in Montreal has a more reddish colour. As this is a Hawaiian preparation, I prefer to use the salt from that place, but as the taste differences in sea salts are so minimal, any good quality sea salt would work for this dish. Just don’t use table salt. 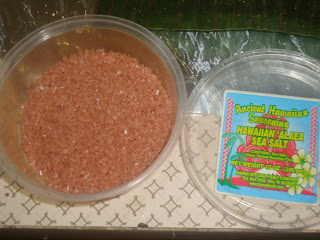 Liquid smoke is sometimes looked down on as a cheater’s method for imparting smoke flavour, but as long as the liquid smoke you buy is naturally produced and contains no artificial ingredients, it is a perfectly good product, as all it is is concentrated condensed smoke. Although when I use real wood smoke on a BBQ, I prefer hickory chips as they give more flavour, I prefer mesquite for this for two reasons. The first is that hickory liquid smoke can be too strong tasting. The second reason is that a very common wood used in Hawaii for the imu is kiawe wood, which is a form of mesquite.
Posted by Evan at 3:58 AM