Out On The Ice?

I have been following a recent series of news stories that relate to the anniversary of a tragic event that occurred last year. A young collegiate hockey player, Brendan Burke, who had just become the first openly gay hockey player at a major US college, was killed in a car crash. His coming out was significant for two reasons. First, no professional team sport athlete in North America has yet come out. Secondly, Brendan was the son of Brian Burke, the General Manager of the Toronto Maple Leafs, one of hockey’s most storied franchises. Brian is a revered figure in the hockey world for his managerial skills and his reverence for tough, hard-nosed players. Now, on the first anniversary of his death, several articles have been published that address the possibility of an NHL player coming out. There are two Toronto Sun articles dealing with the topic, as well as some posts in an interesting blog that covers stories about LGBT issues in sports - OutSports.com.

I recommend reading the following two articles in the Toronto Sun:

"Avery Would Support A Gay Player"


Now there is no disputing that there are gay hockey players currently playing in the NHL. The league has 800 players to have played at least one game this season so it is obvious that some of them are gay. Now some probably don’t care and may not choose to come out even if it were easy to do. But being in the closet is hard, and I would assume there are many who would not want to keep this part of their lives secret. But to date no professional hockey, baseball, football or basketball player has come out while still an active player. Recently there were possibly two NHL players who were almost ready to do so. They consulted with Canadian Olympic Champion Mark Tewksbury, who frequently gets involved with LGBT issues in sport. In the end, these players chose not to come out, but the atmosphere could possibly be changing. Brian Burke’s strong support of his son, possibly changed some impressions about how accepted out players might be, and Tewksbury believes Burke’s support can be an important factor for change. The Toronto Sun article quoted a few NHL players and other individuals connected to the NHL that had encouraging messages that they would accept openly gay teammates. Daniel Alfredsson, captain of the Ottawa Senators said

“I just believe that it is a person’s right to be what they are. If they are gay, it would probably be really hard to have to hide it all the time. There will always be people opposed to it, I suppose. But I have a feeling that overall, it would be accepted.”


An even stronger statement was made by Sean Avery of the New York Rangers. It should be mentioned that Sean Avery is described by hockey writers as “outspoken” and on the ice is an “agitator” or “pest”. For those that don’t speak sports-page-ese, this means he is an unrepentant pain in the ass who can’t keep his mouth shut. Fans of his own team love him, but players and fans of other teams hate him (or possibly love to hate?). He told the Sun :

"If there's a kid in Canada or wherever, who is playing and really loves the game and wants to keep playing but he's worried about coming out, I'd tell him to pick up the phone and call (NHLPA [players’ union] executive director) Donald Fehr and tell him to book me a (plane) ticket.

"I'll stand beside him in the dressing room while he tells his teammates he is gay. Maybe if Sean Avery is there, they would have less of a problem with it."

I think in this case he image as an outspoken agitator lends strength to the message. It sends the message “if anyone messes with him, they mess with me”. And also if someone as tough as him has no problem with someone being gay, why should you?

Blog author Jim Buzinski has predicted that the first out athlete in North American team sports will come from the NHL, and I think I agree with his reasoning. In a post for OutSports (click here to read his article - I have elaborated on a few points), he wrote that the first reason is that the culture of the NHL is less American, as the largest segment of NHLers are Canadian with many Scandinavian players as well. I would add that, although there teams located throughout the USA, including in some conservative areas such as Carolina, Atlanta and Nashville, there are hardly any players that actually originate from these places. Most of the Americans in the league are from more progressive states such as Massachusetts, and New York. Another reason is that it is the least watched of the major pro sports in North America, meaning the players are not as big celebrities as in other sports. Finally, the other sports seem to be more infused with public expressions of religion. As Buzinski says “I can hardly remember a hockey player thanking God for scoring a goal”. While I have maintained that you can still be religious and Gay, these public displays such as thanking God for touchdowns or awards or what have you have little to do with real faith but are more showing the fans they have the “right” motivations. That kind of religious expectation is not likely to be gay friendly.

An additional reason is that I believe that, overall, hockey players tend to be better educated than those in other sports, and more knowledge generally leads to greater tolerance. Canadian junior leagues ensure players keep up solid academic performances and, while US colleges do offer full scholarships as in other sports, there is less competition for the top prospects, so there appear to be fewer “free ride” scholarships given, at least not without an emphasis on maintaining academics. Also, some of the more competitive collegiate hockey teams are strong academically as well. Nearly every Ivy league University, including Harvard and Princeton, have top level hockey teams.

I would be very interested to hear if any of you have thoughts on this topic.

A little off topic, but I’d like to close the post with this picture, as it has a hockey theme, but with an unusual twist. The two flags are for the Montreal Canadiens and the Vancouver Canucks, two Canadian NHL teams. They are in front of Oceans sports bar in Kihei, Maui, Hawaii. I thank my traveling photographer for the pic. (love you!) 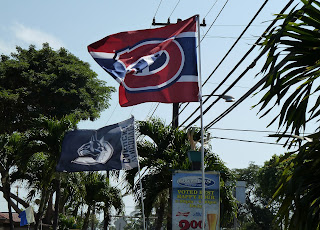 We don't get those kind of trees in Montreal - or anywhere in Canada! Source: EG