One of my favourite things about Hawaii is the remarkable variety of plant and animal life to be found there. It is quite an impressive feat on its own that there are any native species, as Hawaii is in the middle of the Pacific Ocean, thousands of miles from any land mass that would anything growing. Since humans did not find the islands until 1000 years ago, all plant and animal species living in Hawaii before then arrived by pure chance. Plant spores and seedlings might be carried by ocean currents and, with luck, might take hold and reproduce in Hawaiian soil. Even more amazing is that a species of finch managed to take hold in the Islands and evolved into several different species collectively known as honeycreepers. The different species are dramatically different in plumage and have specialized beaks for specific diets. There were also insects, a native bat and some large flightless birds, as well as sea birds that migrate through this section of ocean. 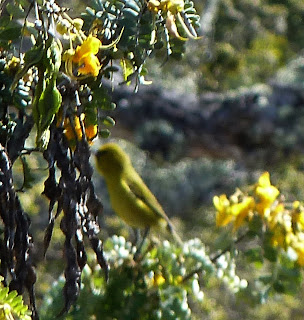 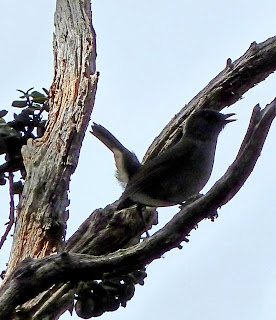 Oma'o - Hawaiian Thrush - Source EG
Human impact on an ecosystem has rarely been as dramatic as in Hawaii. The Polynesians brought various food plants such as coconut, taro and breadfruit, and the Islands’ first land mammals: pigs, dogs and chickens. Though unintended, rats also came along. The Hawaiians cleared large sections of native forest, and hunted several species of birds to extinction. But this impact was minimal compared to the impact of European arrivals in the last 300+ years. While it is not generally considered flora or fauna, the first things introduced by Europeans were sexually transmitted diseases, dating all the way back to Captain Cook’s crew. Though Cook may have introduced a few goats and pigs to the Big Island, many more livestock were introduced in the early 1790's by Captain George Vancouver (goats, cattle and sheep) and other captains. Horses and European pigs were introduced shortly afterwards. The goats and cattle were originally the most destructive to native wildlife. In the first years they were allowed to reproduce without any hunting that would keep their numbers in line. As continuous grazers, these animals ravaged the native forests, where almost no native plants contained any toxins, as with no native land mammals, there was no need for plants to have such defense mechanisms. For this reason the ‘akala or Hawaiian raspberry has no thorns and Hawaiian mint is almost flavourless. In addition to habitat destruction, cattle proved to be very dangerous to people as well. When the cattle were introduced, hunting them was banned for 10 years, to increase their numbers. They increased all right and became aggressive wild animals once again. The most popular hunting method was to dig a pit to trap the wild bulls so they could be killed without risking one’s life. The famous botanist David Douglas died when he fell into one of these pits and was gored by the bull already trapped inside (but there may be more to this story - some claim he did not get into that pit by accident). Wild goats are still a problem, though there are no longer wild cattle. Hawaii’s cattle are now managed on ranches and beef is a significant export to the mainland.

The European pigs are a larger breed and were more damaging to native vegetation than the Polynesian pigs were. Pigs are still a problem in the wild. Unlike other livestock, they do much of their damage in the rainforests of the island, areas not much affected by cattle or goats. They are also very capable of destroying fences put up to keep them out of protected areas. The government does little to nothing to control them, in large part due to hunters who lobby the government to keep game animals available for sport hunting. What I find galling is that hunters typically claim that they are the ones that care for the ecosystem, when they are allowing the continued destruction of native habitat.

A wide variety of animals have been released at various times in Hawaii’s history. Some of these introductions were intended and some were not, but a great many have been destructive. The mongoose was introduced to Hawaii during the days of plantation agriculture as a way to control the rats that were eating sugar cane. Now I’m not sure what caliber of genius decided on this, but this concept was doomed from the start. The particular mongoose that was brought over hunts in the daytime while rats are nocturnal. So now a new predator has been introduced with little to no redeeming social value. While not many rats were eaten by mongooses (no, not mongeese), they found a steady food supply among the native birds of the Islands. Ground nesting birds were particularly easy prey, especially the nene, Hawaii’s state bird. The nene is descended from, and still looks very similar to, the Canada Goose. There is some change in colouring and there is no webbing on their feet, as the nene is exclusively a land bird. The mongoose would eat nene eggs as well as hatchlings and juveniles. On occasion, a mongoose has been known to kill adult geese. Feral cats also prey on native birds, leading to the near extinction of the ‘alala, or Hawaiian Crow. 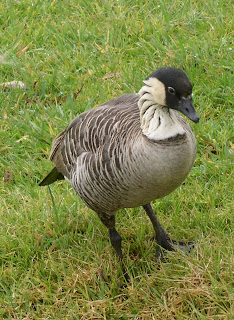 Nene - note the similarities to the Canada Goose - Source EG
Until the arrival of Europeans, there were no mosquitos in Hawaii. They were first released on the Islands in 1826 in discarded bilge water from a British ship and they have thrived ever since. They have decimated many populations of native birds by the spread of avian malaria, a disease for which the native honeycreepers have no immunity. This is why most visitors to Hawaii will never see the native birds. They still exist in the mountain forests, since the local mosquitos generally can not survive above 4000 feet elevation, but most tourists do not travel to these remote forests. The birds in the cities and by the coast have all been introduced, most of them in the last century. Fortunately, some of the native birds may be beginning to develop some immunity to avian malaria, and in recent years some of these birds have been sighted in lower elevation native forests.

Most of the pests and invaders known to the world have made their way to Hawaii, but one particular undesirable has not yet made their way to the Islands. There are no snakes in Hawaii (most guidebook writers deem it necessary to make some joke about this fact - usually involving politicians or tax collectors) and agricultural inspectors are doing everything they can to be sure things stay this way. Of particular concern is the brown tree snake, which was introduced to Guam during World War II and proceeded to eliminate pretty much all native bird life, short out power lines, and they are even dangerous to pets and small babies. On a few occasions, dead or dying snakes have been found in the wheel wells of airplanes arriving in Hawaii from Guam. From time to time, other types of snakes are found and (usually) killed.

As mentioned earlier, because there were no land mammals in Hawaii, plants either did not develop defences against predators, or lost what defences the plants originally had, such as the thornless raspberry and mintless mint mentioned before. Then when foraging animals were introduced at the same time as a large number of foreign plants, the natives were at a distinct disadvantage and were quickly pushed out. Furthermore in the 1870's, many native ohia trees began to die off. 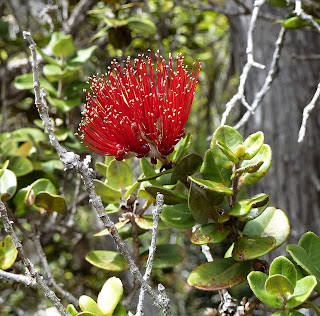 Lehua blossom on an ohi'a tree, one of Hawaii's most important native trees - Source EG
It wasn’t understood at the time, but now it is known that this is a natural dieback phenomenon where the entire canopy in an area will die off over the course of a decade. This will open up the canopy and allow the new generation of seedlings to grow. Because the botanists at the time did not know this, they decided to replace the trees with introduced species, such as eucalyptus, ironwood, redwood, fir, and pine, among others. This was not the only Hawaiian tree impacted by humans. In the 1820's the early merchants and traders noticed that one of the trees that grew in abundance was sandalwood, a tree whose heartwood was greatly prized in China for carved boxes and burning as incense. Since many Chinese products were in demand in Europe and America, the traders had finally found a method of payment for these items. The Hawaiian chiefs also began making purchases using sandalwood as payment, often for absurdly inflated prices, with the burden of collecting the wood falling on the commoners. The desires of the traders and chiefs easily outstripped the supply of sandalwood and the tree was almost eradicated. Today there are a few trees here and there in the native forests but not in anything close to the numbers there used to be.

In modern times, there has been more of an interest in preservation of native plant and animal species and the limiting of invasives. This article from the Maui News shows what damage can be done from just one invasive species, the strawberry guava, to the native bird population. It also describes the tree’s impact on the island’s water supply, and measures being taken for preservation. An interesting tourist attraction that embraces native plant life and preservation is the Amy B.H. Greenwell Ethnobotanical Garden in Captain Cook, on the South Kona coast of the Big Island of Hawaii. It is a living museum that recreates the native Hawaiian agricultural system and preserves native plants. They also operate a nursery that sells native plants for residents to use in their own gardens.

This is not to say that only endemic species have a place in Hawaii’s ecosystem. A great product, lehua honey, is made by introduced honey bees gathering nectar from the lehua blossom from the native ohia tree. Almost all food plants were introduced at some point, whether by the Polynesians or by westerners. This past weekend, the Amy Greenwell garden hosted their annual avocado festival. The avocado is not native to Hawaii, but it is a useful plant for encouraging sustainable agriculture. Here are pictures of some avocado creations made for the festival’s recipe competition. 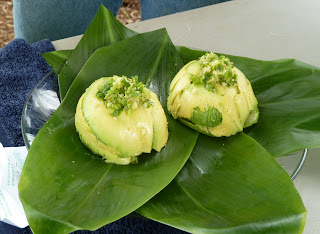 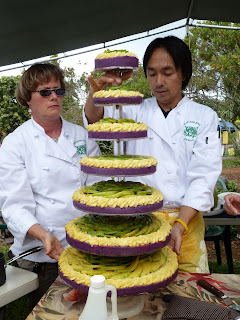 Tiered avocado pie, created by guest chef Hector Wong - Source EG
Much of the information and details for this post were drawn from a very good book about Hawaii’s environmental history. For those not into biology and ecology, some parts of this book can make for dry reading, but I find this to be an invaluable resource. I originally studied this topic for a high school biology project when I was about 16 and this book was a very important source that I found and looked for it until I found a revised edition a few years ago.

Islands In A Far Sea: The Fate of Nature in Hawaii . Revised Edition. By John L. Culliney. University of Hawaii Press, 2006.
Posted by Evan at 3:25 AM

Email ThisBlogThis!Share to TwitterShare to FacebookShare to Pinterest
Labels: Hawaii