Without a doubt, Hawaii is my favourite vacation spot. While I do not have the funds to go there very much (or at all, right now), I used to travel there almost every winter with my parents. They are currently there for six weeks so I thought that I might treat you some posts about my Vicarious Hawaiian Vacation. I don’t know how many posts I will be doing on this topic, and there will probably be other different posts as well, but this is something I would like to try. Possible topics might include Hawaiian history and culture, food and recipes, sights to see and maybe even some restaurants, though probably not full reviews. I may also use, in addition to my own pictures from previous travels, some pictures taken by my mom. If I do, I will attribute their source. 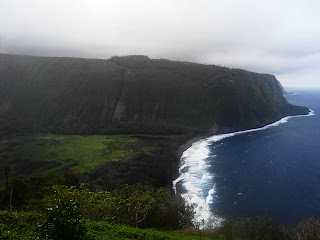 Perhaps the most unique feature of Hawaii is the multicultural harmony and understanding found there. This is the result of Hawaii’s ethnic makeup and history. Hawaii was uninhabited until about 1000 C.E., when the Polynesians found their way to the islands from further south, most likely the Marquesas Islands. Successive waves of Polynesian migration populated the islands until 1778, when the islands were “discovered” by Captain Cook, where he died the following year. For the next 40 years the islands became a stopping off point for Pacific merchant ships travelling between the west coast of North America and Canton, China. During these stopovers, various crewmen jumped ship and took up residence in the islands. They were joined by escapees from Botany Bay, the Australian prison colony. These settlers came from various European nations, particularly Spain and England, as well as the United States. In 1820, a company of Calvinist missionaries from New England arrived in the islands and received permission to land and teach Christianity. One of the reasons they were even permitted to teach a new religion is that less than a year prior, and after the voyage set sail, the king Kamehameha II, together with his mother Kaahumanu, overthrew the major tenets of the indigenous religion, leaving somewhat of a spiritual vacuum. The middle of the 19th century saw some significant shifts in demographics. First, the Hawaiians were decreasing in great numbers. Foreign-introduced diseases killed vast numbers of natives and in the 1850's many Hawaiians left for California, especially during the height of the gold rush. Starting in the 1860's, British, German and American businessmen started growing sugar cane in large quantities and they needed additional labour. Their first major source of labour came from contract labourers from China. This caused conflict as the white upper class was quite racist and became very upset when the workers settled in the cities when their contracts expired. Meanwhile, since the native population was still dying out at an alarming rate, the government wanted immigrants to be citizens and insisted on recruiting those that would be “suitable”. They brought in workers from the Azores and a few Germans, but the plantation owners preferred Chinese because they worked for less money. In the 1880's they began importing Japanese in ever increasing numbers. In the 1890's, the monarchy was overthrown by a group composed mostly of captains of industry, with the goal being annexation to the United States. When annexation finally came in 1900, Hawaii became subject to Oriental exclusion laws America had in place at the time. In response to this, the planters experimented with Puerto Ricans and, eventually brought in larger numbers of Filipinos, as the Philippines were at that time owned by the USA. Finally, beginning in the 1930's and expanding greatly during World War II, American military personnel came to Hawaii in great numbers to staff the many bases set up in Hawaii, such as Schofield Barracks and Pearl Harbor.

The result of all this immigration is a varied cultural mix. Furthermore, many of the cultural groups have intermarried. Hawaiians and Chinese married rather frequently and, especially in the early days, Hawaiian women got together with the Europeans as well. So, although pure blood native Hawaiians make up less than 2% of the population, some 30% or so claim to have some Hawaiian blood. However, not all groups practised this much intermarriage. For instance, until recently the Japanese would only marry other Japanese, sending home for “picture brides”. But it was not only through sex that the cultures mixed.

The most interesting way (for me anyway) is through food. Hawaiian food is, and always has been, true fusion food. The local tradition, still popular today, of the plate lunch shows how local food got started, as well as what it has become. Note that much of the immigration to Hawaii was for plantation labour. By the 20th century you would find many different ethnic groups working on the same plantations. There would be Chinese, Japanese, Filipinos and some Portuguese, along with a smattering of others (though the Portuguese were mainly supervisors). By the 1930's the plantations had “lunch wagons” which offered filling meals that catered to as many of the workers as possible. There are also some stories told by old-time locals of the workers of different cultures sharing their food in the field. From these sources came local food. The major basis is Chinese and Japanese food, with emphasis on rice and soy, but with far more meat than you would see in Asian cuisine. The plate lunch, now a local institution, is a cross between those lunch wagons and the Japanese bento box. It is a 3 - component meal served on a divided plate. A plate lunch consists of “two-scoop rice”, mac salad, and a meat dish. The rice is two portions of white rice, always served from an ice cream scoop, hence “two-scoop”. I have no clue why macaroni salad is so ubiquitous on the plate lunch, but it is, and makes the meal a starch overload. Finally, the meat is piled high, often with Asian flavouring. Teriyaki anything is very popular.

This racial, ethnic and cultural mix has led to a very particular attitude quite different from the rest of the United States. There seems to be a greater level of acceptance and tolerance there. I believe it is no coincidence that the first non-white President was born in Hawaii, of mixed-race parents. The classification of people by ethnic groups is much less common in Hawaii, primarily because there are so many people of mixed race, calling people, black, white, asian, or anything else is meaningless because so many people have a little bit of everything - how can you classify that?

There seems to be a certain quality inherent in the Hawaiian people that outsiders have attempted to identify for some time. The best anyone has come up with is the “Aloha Spirit” Aloha is a Hawaiian word of general greeting and affection. Most books will translate it as having the three meanings of “hello”, “goodbye” and “I love you”, but it really has one meaning that is far more significant and harder to translate. The concept of love and affection comes the closest analogue in our language and, because of this meaning, it is also used as a greeting, hence the meanings of hello and goodbye. Aloha is not just romantic love or friendship. It is a love of other people, society, the land and even a general state of mind that emphasizes caring and being loving. The locals usually make an effort to treat everyone “with Aloha”, meaning to have a friendly, caring attitude towards everyone around them. This is the “Spirit of Aloha” and what makes Hawaii so different from the rest of the United States. This spirit is expressed towards locals of all ethnic groups, and even to tourists, generally treated with contempt by most locals living in tourist destinations. To be sure, some places feature a small amount of resentment towards casual tourists, but this is uncommon and anyone who at least makes an effort to respect the culture is accepted graciously.

This aloha spirit makes Hawaii a very different place in the political sense as well. While the right-left split certainly exists there and can be just as deeply divisive, politics is normally conducted with a greater degree of civility than elsewhere, a quality sorely needed on the mainland now. Unlike in other states, attack ads during election campaigns are typically avoided, as they don’t work here. In fact they are more likely to generate a backlash and are typically used as a desperation tactic to revive a dead campaign, and it never works. On a related note, Hawaii will likely be one of the next states to legalize same-sex civil unions. I mentioned last summer that a bill had passed the legislature but was vetoed last-minute by the governor. It will be re-introduced, is even more likely to pass now and the new governor supports civil unions. In fact, the bill has already passed the state senate with a wide majority, less than a week after being introduced. It is also going to be a strong civil union, providing all the benefits of marriage, just not the title, because calling it marriage would require repealing a constitutional amendment. An interesting story: the author and sponsor of last year’s original bill is state house majority leader Blake Oshiro who is in fact gay, but the media and most other politicians have the good grace not to make a major issue of it. One group tried during his reelection campaign and it backfired badly. He never announced his orientation but when asked at one point last year, he affirmed he was gay but that it is of little importance in how he does his job. It seems Hawaii is on its way to where the rest of America should be. And I do believe this is related to the Aloha Spirit. In response to passing the civil union bill, state senator Malama Solomon said “Let's get beyond this. Let's realize what the spirit of aloha is all about, which means including people no matter their color, no matter their gender, no matter their lifestyle” (source Maui News). I think that says it all.
Posted by Evan at 10:33 PM

Email ThisBlogThis!Share to TwitterShare to FacebookShare to Pinterest
Labels: Hawaii