In my recipes, I have often mentioned using either canned tomatoes or homemade tomato sauce. Tomato sauce is fairly easy to make at home as long as you have a way to store it. The best way is to make a very large quantity near the end of the tomato season, like now, and freeze it in the portions you will use.

That is all the ingredients. This does take some preparation time though. I recommend having someone else help you with this process, otherwise it can seem overwhelming and take a very long time. If you make this much, you will also need a VERY large stockpot - perhaps two. You will have at least 20 litres at the beginning - perhaps more depending on whether there are some rotten tomatoes in the bunch and how full the bushel was. To buy the tomatoes, a farmer’s market is usually the best bet. You do not want beefsteak or other round tomatoes, as they have more juice and not enough pulp to provide a rich sauce. In Montreal, I was able to find a variety called “Super Marzano”, which is a variety similar to the famous Italian San Marzano tomatoes. These tomatoes are very sweet and on the dry side, which means when cooked they make a very deep flavoured sauce with a fair amount of sweetness. I don’t think these are commonly grown in Canada though, but the more common Roma tomatoes are pretty good too, as are any variety of plum tomato. The tomato season runs until the first frost, which in this part of the world is usually sometime in mid-October, though it can sometimes come earlier. Although field tomatoes start becoming available in August, plum tomatoes ripen later and the large quantities at low prices are not available until the season is nearly over. Bushels are generally available starting in September running until about a week or two into October, unless a frost comes before then. This year was bad for tomatoes, and many other vegetables. We had a cool and rainy May and June, then very little rain for the rest of the summer. Also, except for a period of a few weeks in July, it was not exceptionally hot. And finally in September, we got more rain, and colder weather. As they were predicting a chance of frost this past weekend, we needed to get our tomatoes last week. Even in the last week in September many vendors had mostly under ripe tomatoes in their bushels, but we were able to find one vendor at St. Jacob’s Farmer’s Market with good quality ripe tomatoes. If a bushel seems too much for you, half-bushels are perhaps even more common than full bushels, especially this year when both yield and quality were off. 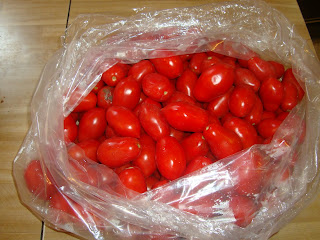 When you get the tomatoes home, the real work begins. This is an all-day process so you may want to wait until the next day and get started in the morning. The first thing that must be done is the tomatoes need to be peeled. To do this, you will need to blanch the tomatoes in boiling water then cool them down, after which the skins will come off easily. There are a few ways this can be done, depending on your equipment, how much help you have, and your own preferences. My preferred method is to set up a pot of boiling water and a large bowl or tub filled with ice water. Place a batch of tomatoes - not too many at one time - into boiling water for about 45 seconds to a minute, maybe more if they are especially big. Then fish them out using a skimmer (depending on the size of your basket and pot, a fry basket could work as well, or lacking anything better, a slotted spoon) and transfer them immediately to the ice bath. Once the tomatoes have cooled back down, they can be removed from the water and peeled. Once peeled, cut the tomatoes into chunks - size doesn’t matter that much - remove the core if it seems quite large and woody (otherwise don’t bother) and put them in your big stockpot, making sure all the juices get in the pot too. Try to be as efficient as possible in these steps, to save time. This is where an assistant can be incredibly helpful. You can divide up tasks so both of you are constantly working. Still a full bushel can take two people about 2-3 hours. So maybe if you are new to this, it might make more sense to start with a half-bushel. 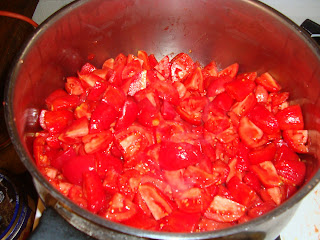 Anyway, once you have a few inches of tomatoes in the stockpot, you can turn the heat on to low. This will save time since while you continue to process tomatoes, the others already in the pot can start cooking. Once the tomatoes have broken down somewhat and there is a lot of liquid in the pot, it is time to add the vodka. As vodka has no taste, you may have wondered why I am using it here. Similarly, I used to find it odd that a classic Italian pasta sauce was “alla vodka”. Vodka sauce doesn’t taste “boozy”, in fact doesn’t taste out of the ordinary at all. But vodka sauce is a rose sauce, which has a base of tomato and cream. When you make a sauce out of something solid, your goal is to extract as much flavour as you can out of the food into the sauce. Most flavours dissolve well in water, which means any liquid works well for making a sauce or stock. However, not all flavour compounds dissolve in water. Some of the distinctive flavours in a tomato are soluble in alcohol and not water. Other ingredients share this quality. That is why many commercial extracts, like vanilla extract, are created using alcohol as the medium. What this means for our purposes is that by adding alcohol to the tomatoes, you will get heightened flavour you would not get otherwise. Since we want to taste the tomato and not other flavours, vodka is the best choice, as it is high in alcohol and has no flavour. In these early stages, stir the pot frequently, making sure nothing sticks on the bottom and scorches. Once the tomatoes are fully broken down, there is less risk of this, but occasional stirring is important. 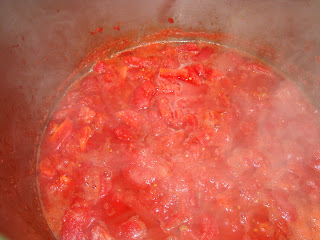 On a side note, you can use this knowledge to make your own vanilla extract as well. This is extremely easy. Take three vanilla beans, split them but do not scrape out the grains, and put everything in a 300-500 ml glass jar, and fill the jar with vodka. Seal it, and store this in a cool, dark place for about 1 month and your extract is ready to use. If you find it is not strong enough, add another bean and set it aside for a couple more weeks. You can even make the vanilla go further by continuing to top up the bottle with more alcohol, as long as the bottle is still at least 3/4 full. And if you seek out really good vanilla beans, you will have some amazing extract.

Once all the tomatoes are in the pot, let them simmer for several hours, until they have formed a thick, chunky sauce. 4-6 hours is a good guideline, but that depends on how much you made and how concentrated you want the sauce to be. When it is done, let it cool for a couple hours, then ladle it into containers. In our family we use 500ml containers for a portion, which is two cups. These are usually sour cream or deli containers that have been saved and reused. Some people prefer to create a smooth sauce by grinding the tomatoes through a food mill, which also removes the seeds, before storing. I think it’s much better left chunky in its more natural state, seeds included. Store these containers in your freezer and take them out as needed. Obviously if you do not have a lot of freezer space, that will limit how much you can make. One bushel should make about 18 litres of finished sauce. This amount will normally last us at least two years, sometimes three.

There are some additional variations you could make to this. You could add some garlic or basil to the tomatoes, but if you are going to use this for a variety of purposes that may not be what you want. Also, if the tomatoes are under ripe, or just not very sweet, a small quantity of sugar added to the pot can help things out a bit. Don’t add very much, a few tablespoons ought to do it.
Posted by Evan at 2:37 AM