I know that most of my readers don’t live near here, but this is an important issue and I want to draw attention to this. Melancthon township is a small rural area northwest of Toronto, between Orangeville and Collingwood that is primarily farmland. Specifically, it is one of the most prolific potato-growing regions in Ontario and supplies the Greater Toronto Area with a large percentage of its potatoes. A couple years ago, a large corporation known as Highland Companies began buying up farms in this area, telling sellers they would continue with potato farming. They amassed a plot of 7000 acres, then submitted a proposal to the Ontario government to operate a limestone quarry on this land. Initially proposed at over 2300 acres this is by far the largest quarry to operate in Canada and they have been granted perpetual rights to draw a 600 million litres of water per day from the area. The region is near the headwaters of the Grand River watershed, which serves over a million people in Southwestern Ontario, including Kitchener-Waterloo, Hamilton, the Niagara region - oh, and Guelph. The quarry will dig 200 feet below the water table so the potential for contamination of the whole watershed is high. This land is far from any major highway, yet they will be running 300 trucks an hour carrying stone back and forth. While they intend to grow crops again on the quarry floor, this concept is laughable, as quarrying generates soil contamination and it is highly unlikely that this would even be possible. Further, this company, while supposedly Canadian, receives primary backing from a New-England based hedge fund, and neither company has ever operated a limestone quarry, let alone a mega-quarry. That tells me they will likely be bringing in an outside operator after approval, so any concerns regarding safety records will not be addressed. Furthermore, there is a loophole in the law saying that quarries do not have to undergo an environmental assessment to be approved. This land is located just outside the Greenbelt, a protected area that grows much of Ontario’s produce. Fortunately Ontario’s government has recently reversed course and has finally ordered an environmental assessment for the project.

With this impending threat to our local food security, local Ontario chefs have come together to show solidarity with the protests against this mega-quarry. Leading this is celebrated chef Michael Stadtlander, one of the country’s best chefs and one of the strongest advocates of local, farm-to-table cuisine. The Canadian Chef’s Congress, of which he is the chairman, has organized a fundraising dinner at an area farm that did not sell out to Highland and they are billing this as “Foodstock”, with the implied reference to Woodstock quite intentional. More than 70 chefs, including Stadtlander, Jamie Kennedy, and other top chefs will be present and contributing dishes. Unlike most celebrity chef charity events, that will usually cost more than $100 per person, Foodstock is a pay-what-you-can event. You can either register in advance at www.canadianchefscongress.com or pay at the gate - the suggested donation is a mere $10. Of course, since all funds go to support the cause, larger donations are obviously welcomed. This is a no-frills event - except for the food. Attendees should bring their own plate, cutlery, napkin and water glass. As this is on a farm and will go rain or shine, it is probably also a good idea to bring a chair and boots. The event is on Sunday, October 16, 2011, from 11am - 5pm. The farm is in the village of Conover, at county road 124 and Melancthon 20th sideroad. To get there from Toronto, take Hwy 401 to 410, then to Hwy 10 (Hurontario st.) and stay on it past Orangeville to Hwy 89 at Primrose. Go left and continue to county road 124, just before the town of Shelburne, turn right and follow 124 until 20th sideroad. I imagine there will be signs near the location. I believe it is about 1 hour’s drive from Toronto, depending on where you are. It seems there are also bus trips being organized to the event from Toronto, Guelph, Hamilton, and Collingwood. These are being organized primarily on Facebook.

I have always wanted to attend one of these multi-chef dinners but the price was always way too high - even though it would be going to support a worthy cause. This one is different. Not only is the price much more reasonable, this really is an important issue for this region and I want to give my support. Also, this event is occurring on my Birthday, my 30th. I will most definitely be attending and I hope if there is anyone else reading this who lives in the GTA or Southwestern Ontario, please consider taking the time to attend this event, have some great food, and show your support for our environment and our food supply.

For more information on the mega quarry and the risks it causes, visit:

For information on Foodstock, or to register in advance, visit: 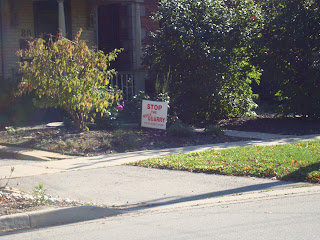