Having Fun in Guelph

One thing I miss about living in Montreal is the festivals. So much goes on there that one can always find something interesting to do. There is also a great deal of nightlife that is generally assumed not to exist in smaller communities. I have always considered Guelph to a very sedate city, where everyone goes to bed early and not much exciting happens. Well, that’s not entirely the case. Having a big University here is of course one important driving force, as university students want to have some kind of nightlife. Today I will discuss two events I attended recently that were well attended and great fun. First is the Guelph Ribfest, which I mentioned in an earlier post, that took place at the end of August. The other is Guelph’s own Nuit Blanche, in conjunction with the Guelph Jazz Festival, that occurred two weeks ago.

Ribfest has been an annual event here for some time, and is put on by the Rotary Club of Guelph. It is part of Ontario’s BBQ contest circuit, just like the Rib and Chicken cook-off in Ottawa that I mentioned previously. It takes place on the north end of Riverside Park, one of Guelph’s largest public parks, which features a large field more than big enough to accommodate a festival. There were 9 competing ribbers, including Blazin BBQ that I reviewed in Ottawa. However, unlike Ottawa there was a lot more to the festival than just the contestants. There were many other stalls that sold various sides, most of them along the lines of carnival foods. There were blooming onions, roasted corn on the cob, ice cream and even a funnel cake cart that did all kinds of stuff fried and “on a stick”. There was also a midway, a stage with live musical acts, and a beer tent. And thanks to new provincial liquor laws, you could actually consume alcohol anywhere inside the grounds of the event, rather than only in a designated “beer tent”. Still, there wasn’t that much drinking, as this seemed to have a definite fairground sort of atmosphere and very family-friendly. Near the entrance to the festival site, there was a classic car show. Unlike classic car shows at, say, a major auto show, there was only minimal registration for this event. The way I understand it, if you want to take part, you simply show up in your car and let them know you want to display in the show. This means that not all the cars are on display at any one time and they are there as long as their owners want. This has always been successful and I know there are many classic car owners in the Guelph area. 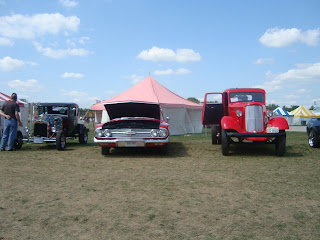 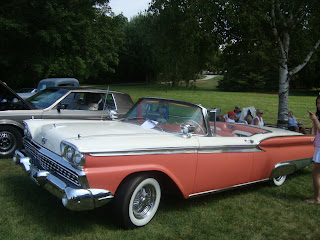 I had visited before, years ago, with my family and they were not overly impressed. Partly, my dad doesn’t like pork ribs or waiting in lines. Also it was rainy when we were there and it didn’t seem all that impressive. This year, we had beautiful weather all weekend and we approached the event in a smarter way. I went first to scout things out and ensure that at least some of the contestants were offering beef ribs, which we all love, and to determine a reasonable plan of action. The one difficulty was parking - this event is getting so big and popular there are not enough parking spaces. The dual problems of lines and finding a place to sit were resolved by having my dad reserve a place and sit while the rest of us went to wait in line for the food. The ribs were great once again, and the blooming onions were huge and perfectly fried. We all had a great meal and a great time and we plan to go again. 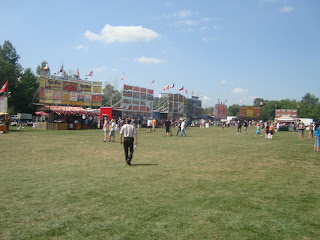 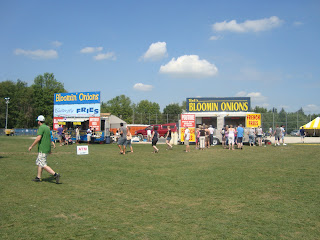 Nuit Blanche is a general term for a festival that is held at night, and runs from dusk to dawn. This is something that has been done for a while in Paris and Berlin and has expanded to Canada. Montreal has had one for quite a while, and Toronto has one as well. They are usually associated with music festivals, but sometimes they will be tied to other celebrations. This is the second year that Guelph has included a Nuit Blanche as part of the Jazz festival. As I said above, Guelph is not considered a late-night kind of place, but the timing was perfect. Student move-in day at the University was one week before this event so the city has just had an influx of many young people wanting to stay up late and party. Generally, the late night scene in Guelph focuses on a cluster of bars and clubs in a section of the downtown, which many downtown residents do not like because of all the late night drunkenness and disorder. Last week, it was certainly busy at the bars, but there were even more people downtown for the jazz festival. In the evening they had a jazz tent covering about a block of a downtown street, complete with food, beer and a stage featuring free concerts, continuing until a bit after midnight. But the real action was in various other locations throughout the downtown with numerous concerts continuing all through the night. There was one in an alleyway behind a café on Douglas street, a very small street right near the square. There I heard A Dangerously Funky Night with Mr. Danger. The crowd was really into it and there was a bit of dancing (oh, and a few hot guys too!) After that, there was a great set, headlined “Love and Affection”, performed by Woodshed Orchestra, in a hall inside a nearby church. They were kind of a jazz/dixieland mix and had a good sense of humour too. A lot of the same people from the Douglas Alley show were here as well and were even more exuberant. Many of those same hot guys were there and dancing at this one too, and I did get the impression that at least some of them, and possibly a large number of them, could be gay. I didn’t get a chance to talk with them and you can really never tell in an environment like this, but this was encouraging to me. First of all, it is so rare to see men really enjoying dancing when they’re not directly dancing with a girl, and especially for guys to dance as a group. I have always considered Guelph very conservative so this is a good sign since this indicates more openness at the least. And of course no one took any offense to these guys in any way. Of course I spent a good deal of time watching them! I probably should have tried to strike up a conversation though. Well, at least I got more involved than I usually would. One step at a time.

At two I started to listen to another performance at the same location, but I wasn’t really into this one, so after a while I decided to leave and get something to eat. Yes, it was 2:30 in the morning but there is a new establishment in Guelph that specializes in Poutine. Poutine is a Quebec specialty which is, at its most basic, french fries covered in brown gravy and topped with cheese curds. Smoke's Poutinerie, part of a chain, stays open until 4 in the morning, allowing them to make a mint off the crowd coming out of the bars. In Guelph, the bars close at 2, so going there at 2:30 on Sunday morning (after Saturday night) was probably a mistake. The shop was packed with the ordering line snaking back all the way to the door. Everyone seemed to be yelling - but apparently only the customers (!). More proof, drunk people love poutine! But you don’t have to be drunk to eat this - just not be health conscious. Also fantastic for a hangover. I feel that I need at least one more visit before providing a full review so consider this a preliminary review. In addition to the traditional poutine, they also offer many variations, mainly with various meat toppings, such as sausage, chilli, pulled pork or even Montreal Smoked Meat. There are also vegetarian options, which use a vegetarian gravy. I only had the basic poutine, and after tasting it, I found it was very good, but I have reason to think their more elaborate offerings might be better. For this reason I want to try them again before giving a full review. What I will say that their fries are impeccable and they do not cut corners by using packaged ingredients.

So there is some fun to be had in Guelph, at least on occasion.
Posted by Evan at 3:26 AM

Email ThisBlogThis!Share to TwitterShare to FacebookShare to Pinterest
Labels: about me, food, guelph sights, restaurant reviews