A Day At Foodstock

I’m sure you are eager for news of how Foodstock turned out (at least some of you are), so here is my report and review of the event.


We planned to arrive around about a half hour after the official opening time of 11am, so we left Guelph at 10am, planning for about a 90 minute drive though the countryside. As it turned out we got within a couple miles of the farm in only an hour and 10 minutes - then came the first clue as to how popular this event was to be. All of a sudden, we hit total gridlock. When we eventually got to 20th sideroad and made the left turn I was able to really see how far back the line of cars continued down county rd 124. The volunteers did their best to let people know where the parking was and guided people in fairly well but, due to them lineups, it took about 50 minutes to get to the field being used as the main parking lot - a distance of maybe a few miles, if that. Seeing all the cars already parked there, in another full parking lot, and along the sides of a few sideroads as well as all the cars still on the road behind us, it was clear that many thousands of people were attending. Add that to the several buses that were bringing people from Toronto, Guelph, Collingwood and other places and this makes for massive attendance. I was wondering how many people would show up, as the forecast had been calling for rain most of the week and that day’s forecast was calling for mix of sun and cloud with a chance of rain. Driving up, it was raining in Guelph but closer to the event the weather was beautiful. Later in the day, the weather was more mixed, with intermittent showers, and a cold wind by mid-afternoon. The great thing, though is it didn’t seem to bother too many of the attendees. They came prepared and committed; perfectly willing to accept a little discomfort for a great experience. 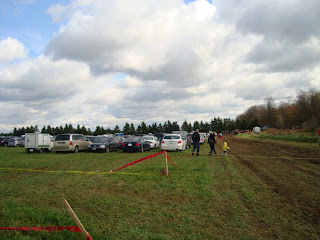 There were close to 100 chefs at the event, from restaurants in Toronto, Collingwood, Niagara, the local area and many other places in Ontario and two from outside the province. Each booth was spread along a network of paths leading through a forested area and around the outside of that area. The paths were quite muddy, but people were warned to bring boots.  At each booth, the chefs served up tasting portions of a dish prepared especially for the event. There were rather long lineups at most, if not all, of the stations, which meant a good deal of time was spent waiting in line. Also there was no place to sit, but these two things kind of worked together; you would get one bit of food and you would eat that while you waited in the next line. I did not even get to half of the booths, especially since by the afternoon many were starting to run out of food. Still I must have had at least 20-25 different tastes, possibly more. 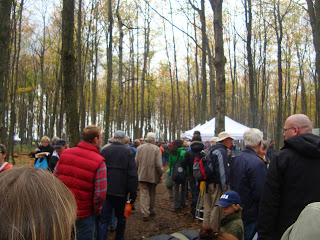 All the food was of high quality and as there were so many different things I can not even remember all of them. Many offerings featured potatoes, as this is a potato farm. Also, given the weather and number of people to feed, it was not at all surprising that there were a great many soups and stews on offer. An early standout was a Jerusalem artichoke soup with brown butter. They heated the soup on a campfire and suspended the pot rather than placing it on a grate. 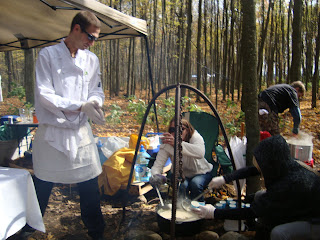 Another standout establishment was Café Belong, a new restaurant in Toronto owned by celebrity chef Brad Long who has made multiple appearances on Food Network. Long was there himself, shucking and serving oysters. They also featured a vegetarian stew that was quite tasty and enhanced to spectacular effect by a chutney (don't remember what it was though). And the freshly shucked Malpeque oysters were among the best oysters I have ever had - juicy and very pleasantly briny. My mom has never really liked oysters but tried one and loved it - much to her surprise. 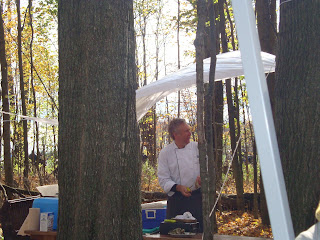 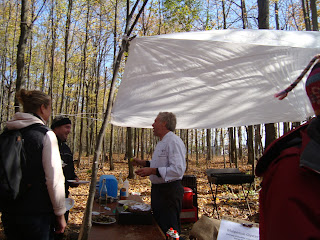 Later came two very good fish dishes: a smoked whitefish mousse with local potato chips (not sure if they were made commercially or in-house but they were phenomenal), then arctic char hot-smoked over a bed of hay and served on a thin slice of daikon with some sliced onion. 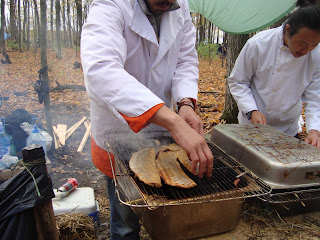 There was a very good apple and pumpkin cake that really got some nice juiciness from the apple.  Then was what I think was the best bite of the day - Le Select Bistro offered mustard-braised rabbit on a white corn polenta with dandelion greens, topped with julienned apple and pea shoots.  This was one of the more elaborate and composed dishes, yet still warm and comforting with a stunning  flavour. 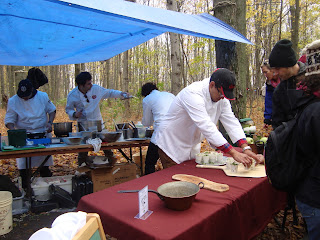 Caplansky’s food truck, the only food truck operating in the Toronto area (though they are still not allowed to operate downtown) was at Foodstock as well, and offered smoked turkey on a beet-flavoured goat cheese. Maybe not one of the best items but still very good. 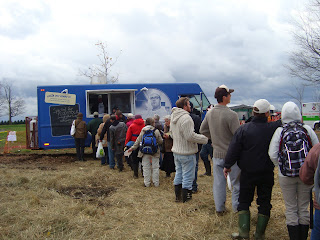 By this time we were in the area closer to the main stage where the musical performances would take place and the lines were even longer. There were some very good apple crullers dusted with maple sugar and served with an apple caramel. Then we entered what we thought was the line for the next booth but it was in fact a line that continued past several booths in a steady flow. First was pulled pork on an apple slice. Then was the George Brown college chef school which had several offerings: a squash soup with candied pecans, an excellent antipasto on fresh bread, and apricots preserved in an icewine syrup. Then was celebrated chef Jamie Kennedy’s booth. He was serving french fries.   No kidding. Of course he used potatoes from farms in the township and they were absolutely perfect.  It was raining when we were served, but the fries stayed crispy and they had some nice herb seasoning. They came with a choice of two mayonnaise-based dipping sauces, a chilli mayo or a cider vinegar mayo which was very tasty. There was also a good smoked pork sausage with an apple compote. Then finally came Michael Statdlander's booth, occupying the ultimate prime location right next to the main stage. That was only appropriate as he was the organizer of this entire group of chefs. He was serving a potato, pumpkin and cabbage soup with smoked bacon, which he ladled out of a giant pumpkin.  One booth I regret not stopping at was one that had bison prosciutto which the chefs were carving as they went.


We left a little after 3:30. The wind had picked up, it was getting a bit cold, and most of the food had run out.  There were many big name musical performances yet to come on the main stage, but that wasn't really the reason I was there. But for those that stayed on, the final hour and a half of the event featured performances from the Barenaked Ladies, Jim Cuddy and Sarah Harmer, among others.

It was very hard to gauge exactly how many people showed up at Foodstock but the numbers were clearly massive. Based on a quick view of how many cars were parked in the field, it seemed quite likely there were at least 5,000 to 10,000 attendees, and of course the buses likely brought many more. Some of the preliminary estimates are suggesting there were as many as 28,000 -30,000 people on this one farm on that one day. That amounts to half the population of the entire county and was most likely the most attended event ever held in Dufferin County. Up to 30,000 people were willing to drive a good way to visit this beautiful bit of farmland and make a statement that this land must be kept as a potato farm, and a mega quarry is a very bad use of this land. There are also some  suggestions that the organizers may do this again next year. Now that an environmental assessment has been ordered, there will not be any final decision on approval of a quarry for several years, which will mean that the quarry opponents will have a long fight ahead of them with plenty of legal expenses to pay for. Proceeds from Foodstock and donations to the NDACT will pay for legal costs and advocacy work to make sure that the environmental assessment is done properly and addresses all of the potential risks. There was also some worry in previous weeks about what effect the provincial election might have had, as the opposition Conservative party is very pro big business and seems to be against environmental concerns (they are very much like the US Republicans) and if they had won it was very likely they would overturn the call for the assessment. As it happened though, the Liberals barely won re-election so what was agreed to before will continue. No decision will be made as to approving the quarry for years. Still that does not mean there is no risk, since many environmentally damaging projects still receive a go-ahead despite such concerns.  I am glad many of you care about this issue; while aggregate is always needed for building projects, it is not acceptable to take Ontario's most fertile land and take it out of food production, especially when there is also a real risk of damaging so many important watersheds.

For more information on the fight against the mega-quarry and for the latest news and updates on the fight, visit the North Dufferin Agricultural and Community Taskforce (NDACT) at www.ndact.com Those of you from Canada are also encouraged to contact your local members of federal and provincial parliament to make your views known. NDACT has petitions that can be signed and sent in (the government needs original signatures so an online petition is not available). There are also links to related media articles and you can also follow no mega quarry on facebook and twitter.
Posted by Evan at 3:25 AM