I have now left Montreal. I will explain the details in a forthcoming post. But the night before leaving I went to eat at Pintxo, a Spanish/Basque restaurant tucked away on a side street in the Plateau Mont Royal neighbourhood of Montreal.

The street is mainly residential and 2-3 blocks from Rue St. Denis, where many more restaurants are found. I first went to this restaurant with my parents almost 2 years ago and was impressed then. The style is tapas - “pintxo” is the Basque version of Spanish tapas. The restaurant features a menu with a wide variety of pintxos that use typically Spanish ingredients but are combined and presented in a modern way. They have main courses as well and offer a tasting menu that includes four pintxos selected by the chef and a main course of the diner’s choice. While I’m sure the main courses are good as well, I have not tried any of these larger dishes on either of my visits - opting instead for many smaller ones because tapas restaurants offer the opportunity to sample many different things. This is especially good if you are the type of person that, when faced with a menu at a good restaurant, wants to order everything because “it all looks so good!” I am definitely like that so, like on my previous visit, I ordered all pintxos.

The servers suggest 5-6 plates per person, but I would suggest that, to have sufficient food from small plates alone, you will probably need at least 7 per person. I started with six, found it not to be enough and added three more dishes.

I began with an octopus carpaccio with cava vinegar. This dish certainly showed innovative technique as the dish was presented in sliced rounds as for beef carpaccio, but an octopus consists primarily of tentacles that are much thinner than a loin of beef. What they appear to have done is gather a mass of octopus tentacles and possibly additional body meat to fill the gaps and somehow form the mass into a tube and frozen to set. This remained intact because carpaccio is usually sliced thin while frozen and allowed to thaw on the plate. The actual flavour of the dish was mild and not overly distinctive, but worth trying at least for the novelty. Second came maple smoked scallops with green beans and sundried tomatoes, served cold. The smoked scallops were excellent and within the smoke you could taste a hint of the maple. The other elements of the dish also worked very well together. Third was fresh sardines layered with avocado and marinated vegetables. A very pretty dish (see picture) and a good concept but it could have been a lot better. The main problem was the avocado was underripe. If the avocado was ripe and properly creamy I believe it would have worked well with the strong flavour of the sardine. More marinated vegetables would have helped too. As it was, the sardine was really the only thing you tasted and, while nice, did not make for a good, balanced dish. 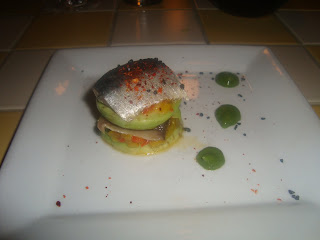 The next dish was a piece of local lamb saddle, seared on all sides, cooked medium-rare and served with sweet potato puree. The dish was probably the simplest dish I had, but perfectly executed and one of the most flavourful. They left just enough fat on the lamb to provide the lamb-y flavour that I like so much but was not fatty to the point of it being unappetizing. The lamb was cooked correctly, nicely seared, well seasoned and accompanied by sweet potato that was perfect. 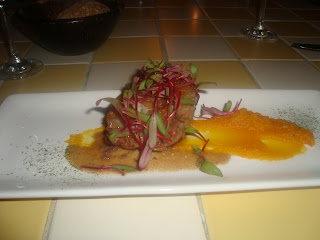 Up to this point, I had been drinking a glass of Spanish red wine with my food. Wine matching can be very difficult with tapas style dining as you are eating a wide variety of foods that don’t necessarily match with any given wine. Just choose what you like and go with it. At this point I decided to go with a sherry called Apotoles, which was very impressive. It had a taste kind of like salted caramel on top of the traditional sherry taste. And the timing worked out well, because the next course to arrive was seared foie gras with vinegared lentils, making an excellent wine pairing. A wine that is slightly sweet is often a good match for foie gras. 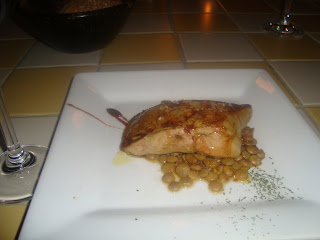 The second wave of plates began with mushrooms stuffed with duck confit. What was unexpected here was that rather than “stuffed” mushrooms, the duck confit seemed to be more of a sauce for the mushrooms. The taste was almost like a bolognese pasta sauce, but with duck. Exquisite. The cremini mushrooms had good texture as well to stand up to the deeply flavoured sauce.

Next was a seared scallop served on what they called a “chorizo tapenade”. Now a tapenade is typically a coarse puree or spread, often made from olives. What this was was pieces of chorizo cut into very fine dice and fried or sauteed until crispy. These were tossed with pieces of some type of pea and served as the base for the scallop which was topped with tobiko, or flying fish roe. While very small, this dish was probably the best of the night. The scallop was perfectly cooked, the chorizo was amazing and there were so many different textures going on that it was a joy to eat. I have known chefs to top many a dish with some form of fish eggs as though adding caviar was a sign of quality, with little regard to what kind of roe was used and whether it actually made the whole dish better. In this case, the tobiko was perfect as it has a most peculiar texture that provided great contrast to the dish. The eggs have crunch to them but they also kind of pop when you bite them so it’s a really interesting experience when eaten with the soft scallop and chewy, crispy chorizo. 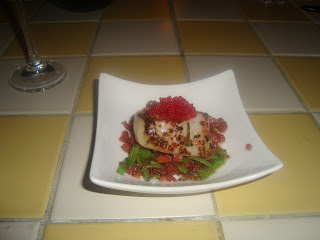 The final dish was chorizo sausage with morcilla, or blood sausage. They use a good quality chorizo here so once again the chorizo was excellent. Now normally I do not like blood sausage, as it usually has a texture I describe as “chalky” that does not appeal to me. This was different. They did not pack it into a casing but left it in a pate consistency, so it was almost like a spread. The taste was very good and the texture was all right for my taste. And of course the pairing with the chorizo was successful as well. 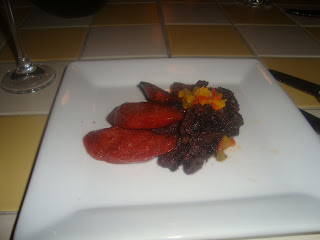 I recall from my previous visit that their desserts are good, but I had already gone a little overboard on food and wine and decided not to order one this time. The service was very good, especially as this was Saturday night and the restaurant was full. There were one or two very minor errors, not even really worth mentioning as they did not detract from the experience. The bill can get away from you here, but it is certainly possible to spend less if that is an issue. The main courses are around $20 and seem to be of a good size whereas the pintxos average about $7 apiece, running from $5-10 with a couple going to $12. The tasting menu I mentioned earlier might be a good deal here as it includes four pintxos and a main course for $32. If you do what I did, you will end up paying more, up to $100 with wine, tax and tip.

The restaurant is small and is rather popular so reservations are a good idea, especially if you are going on a busy night. Although I have now left Montreal, I may still post some additional reviews from places I have eaten in previously.