Before I get into my recipe, I would like to acknowledge a sad passing among the readers of this community of blogs. Our good friend Darryl, whom you may know if you read Amar’s World or Scottie’s Toy Box, has passed away of a heart attack. He was a man of great love and honour. He was a man of God, yet he refused to accept people who used religion or any other reason to attack gay people. While he was straight, he had the greatest respect for us and was raising his children to be caring and tolerant people in their own right. He was a great example of how everyone should behave and comport themselves if we are to become a more tolerant world. He leaves behind a wife and six children, and my condolences go out to his family at this time.

This recipe is my mom’s. It’s an old Eastern European/Jewish style recipe for roasted/stewed chicken. While the chicken is not cooked in the sauce it is cooked in a closed pot and a sauce or gravy forms underneath. And it is served with kasha prepared in the traditional manner. I have made this recipe for myself in a somewhat different manner, but I am presenting you my mom’s method.

Cut the potatoes into a small-to-medium dice, 1 inch cubes at the largest, maybe a bit smaller than that. Slice carrot rounds to a similar size, or even smaller. There should be approximately as much carrot as potato. Put the vegetables on the bottom of a large roasting pan with a lid that will be large enough to contain the chickens. 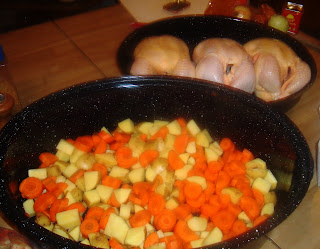 In a saute pan, either render some excess fat from the chickens or melt duck fat. Butter is also an option. Saute onions in the fat until soft, then add paprika and cook briefly until a thick paste forms. If it is too dry, add a little oil. Place the chickens on top of the potatoes and carrots back side up. Using a basting brush, paint the onion and paprika mixture on the chickens, then flip them and do the same on the other side. 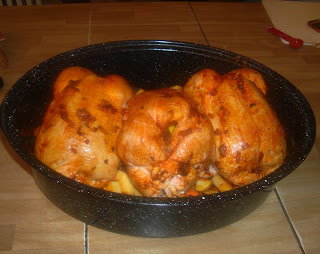 basted and ready for the oven
Add wine and water to the bottom of the pan and put in a 350 degree oven with the lid on. Meanwhile, melt butter in the same pan you used for the onions and saute the sliced mushrooms until cooked down. When done, add the mushrooms to the pan and cook everything for about 1.5 hours, or until the vegetables are tender and the chicken is fully cooked and very tender. 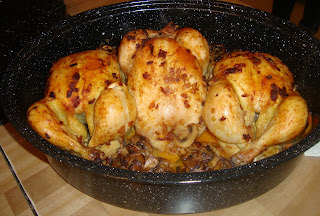 the cooked chickens
When I have prepared this for myself I have used slightly different techniques that also work, though they may produce a slightly different product. For instance I would cut the vegetables a little larger and roast them with paprika and oil and a lesser quantity of wine for 30-40 minutes before adding the chickens simply seasoned with salt pepper and paprika and cook only until the chickens are just done. I have to say though, I like my mom’s version better.

When the chicken is almost done, prepare the kasha. A groat is the nutritional part of a grain such as oats or buckwheat. When toasted, the groats from buckwheat are often referred to as kasha. This is a very nutritional grain and not all that expensive. It can sometimes be found in supermarkets, usually in the kosher foods section. Otherwise, it can be found at health food stores. 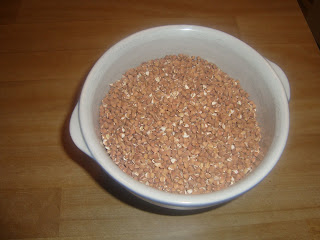 kasha
Now kasha can simply be boiled in a pot of water, the same way as rice, but my mom’s method, while a little more technically difficult, produces a better product. It is also the traditional method to prepare kasha. Boil the water on the stove or in a kettle. Meanwhile, combine the kasha with one beaten egg in a bowl and combine. The trick here is to make sure that all the groats are coated and there is NO visible egg left unmixed. If you are preparing a different quantity of kasha, you will likely have to adjust the amount of egg used. One egg with 2 cups of kasha is about the right ratio. If there is too much egg, there will be some loose egg and, when cooked it will fry and stick to the cooking pot. When the egg is thoroughly mixed in, add the kasha to a very lightly oiled sauce pot and cook the kasha until there is a nutty smell and the kasha looks quite dry. When you reach this stage add the boiling water directly to the pot. The kasha will clump together at this point (because of the egg), so break up the clumps with a fork and let the kasha simmer on low heat for about 10-15 minutes or until tender. When the kasha is cooked this way, the texture will be smoother and not as grainy as with boiled kasha. You are also less likely to have groats sticking to the side or bottom of the pot if you have coated the kasha with the egg. 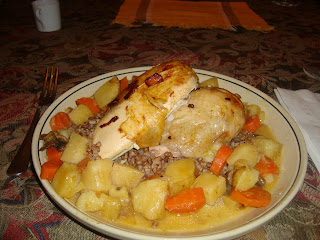 The addition of the sour cream is where this recipe deviates from traditional Jewish cooking. To be Kosher, in compliance with Jewish dietary laws, dairy products cannot be eaten in the same meal as meat. So sauteeing the mushrooms in butter would not be done either. If one truly wished to keep this kosher (or at least traditionally Jewish) you would use chicken fat or oil instead. Finishing stewed dishes with sour cream, however is a very common element in the non-Jewish cuisines of Eastern Europe. It works particularly well in dishes where paprika is a prominent ingredient, thus we use it to finish this recipe. Sour cream adds richness and counters the spiciness of paprika while giving a pleasant tang of sourness.
Posted by Evan at 3:36 AM