In my last post I described Old Montreal and I highly recommend it as a tourist attraction. One of the sights I highlighted was the Pointe-a-Calliere Archeological Museum. This is a fascinating place, and not just because of its unique architectural design. I will also describe an affiliate museum at Place Royale, across from Pointe-a-Calliere. 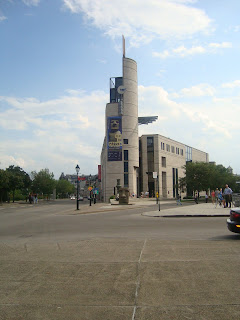 The museum is located in the heart of Old Montreal, on rue de la Commune, just across from the old port. The land it is built on is the oldest built-up part of Montreal - the first area of French settlement. The museum’s permanent exhibit, in the basement, delves into that story to a great extent, and I will save it for later in the post. Admission is $15CAD for adults. The first floor has a theatre that shows films relating to current exhibits. Featured temporary exhibits are located on the second floor. Last year, the display centred on Rapa Nui, also known as Easter Island. I have a great deal of interest in native Polynesian culture and history, especially since I have become very knowledgeable regarding Hawaiian traditions. It was very interesting comparing the stories and artifacts from Rapa Nui with what I know about Hawaii. I remember there were some interesting figures that had sexual overtones (I do recall the museum offered some sanitized explanation). I don’t remember exactly - I should have taken some notes. 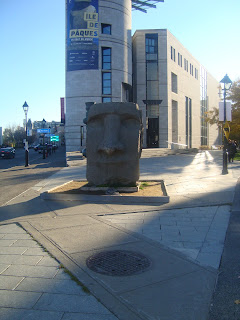 This head is a replica - not an authentic artifact
The third floor has a restaurant and the fourth floor is an observation tower, but the heart of the museum is the permanent archeological exhibit located in the basement. The exhibit displays original foundation walls and all the relics what was actually built on that spot throughout the history of Montreal. At the far end is the first cemetery of Montreal. Many of those interred there were killed by disease and war - there were both natives and settlers buried there. The bodies have long ago been exhumed and buried in other cemeteries when buildings were built on the site but burial cavities are still visible. Cemetery site - the indentations are original and locations of the graves. The projection at the back creates an interesting atmosphere
Underneath the museum building are the foundations of several different structures that have been there over time, most recently an insurance company building. The building’s supports were somewhat unstable and had to be repeatedly reinforced. Part of the cornerstone of the old building, together with its supports are preserved for view near the elevator. Continuing downstairs, you will find an old sewage collector. This was originally the St. Pierre river, a small stream, which was later converted into an acqueduct. Above the sewer line is currently Place d’Youville. A modern water main runs along the same course and is identified. There are future plans to open up the old collector sewer and allow visitors to explore this as well. The entire exhibit follows the theme of the different uses of a specific physical location throughout Montreal’s history. There are interactive maps that show what was in the immediate area during different eras. 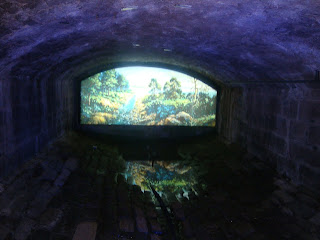 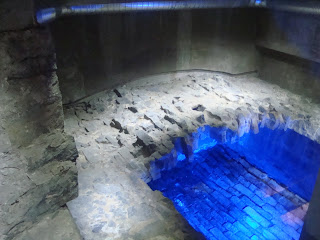 two sides of the collector sewer
You can now continue underground where there are the remains of several house plots, old fortifications and a public square. These are underneath Place Royale. Place Royale was the site of the first public market in Montreal and the residence of the seigneur, the aristocrat in charge of the city’s governance. Inside Place Royale, is a museum exhibit that celebrates the many cultures of Montreal’s residents. There are videos from several interfaith couples, a multimedia display recounting food traditions of various cultural groups, as well as cultural artifacts and personal items that in some way celebrates the diversity of our residents. You can enter either from the street or from Pointe-a-Calliere through the underground exhibits. 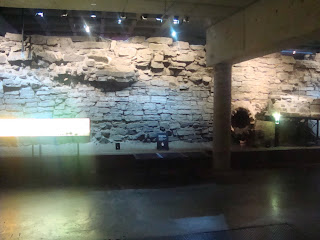 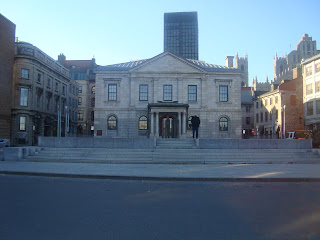 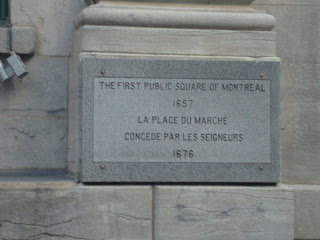 There is continuing archeological work going on underneath this section of the city, so this museum may be expanded and even more interesting in the future. Even as it is now, it is one of the best parts of Old Montreal.
Posted by Evan at 8:55 PM