I would like to draw attention to a large event taking place today in Washington, D.C. - the Rally to Restore Sanity and/or Fear, organized by Jon Stewart and Steven Colbert. While this may seem to be merely a humourous stunt, it actually carries a serious message: that people, especially in the US, need to understand they are being manipulated by the powers that be. Stewart and Colbert use humour to illustrate how messed up government has gotten and how the moderates are being ignored in favour of radicals.

Many of the blogs I am reading draw attention to Catholic priests that have abused children. Recently there have been events in Montreal that have caused me to look at this issue from a slightly different angle. I am a little hesitant venturing into such topics as I am not Catholic and in some ways my knowledge is lacking, but I certainly have plenty of opinions and will rely on those.

The story begins very far away from sexual abuse. It is the story of Frère André, a well-known priest from Montreal who was canonized earlier this month in the Vatican as Saint André, the second saint to be born in Canada. Frère André grew up as a child of little means or evident ability in a large family. Eventually he joined the church and found employment as a doorman at a Catholic school. Then he started to become known for having “healing hands”.

At this point, I would like to interrupt the story to editorialize somewhat. I do not really believe in this concept of healing from religious laying on of hands, just like I do not believe in the “miracles” that are required as qualification for sainthood. I feel the belief in these abilities promotes the practice of medical quackery and unresearched patent medicine. These practices harm more people than they heal. While in most cases laying on of hands probably won’t do any harm, it lends credence to practices that may.

Frère André did not take any credit for the healing of his “patients”; he attributed all power to his patron saint, Saint Joseph. In fact, Frère André’s legacy to Montreal bears the name of Saint Joseph. Andre raised money throughout the Catholic community to build a shrine to his patron, the St. Joseph’s Oratory, a truly magnificent structure near Mount Royal that is one of the city’s best known landmarks. In fact, in the Monopoly world edition game, the picture chosen to represent Montreal (which occupies the Boardwalk space) is of the Oratory. 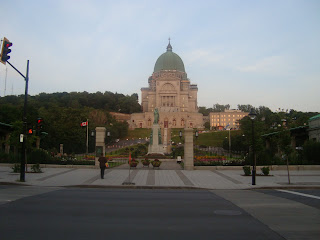 Saint Joseph's Oratory
As I said, Frère André became Saint André this month and, this weekend, there will be a mass held to honour Saint André. There is a huge number of faithful expected to attend, and it will be held at Olympic Stadium. 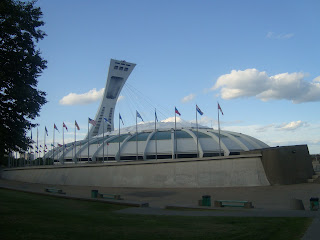 O, O, O, There's that Big O again!
There is a group of survivors of clerical sexual abuse that have asked the Catholic church leaders of Montreal to divert the admission fee of five dollars apiece to benefit those who have suffered at the hands of Catholic priests. There is a debate over whether the Church should agree with this. First, it should be pointed out that Frère André was NEVER, in any way, accused or even suspected of ANY inappropriate conduct and was never in a position where he might have been complicit with hiding the misdeeds of others. As far as anyone knows, he has nothing to do with this issue other than being a symbol of the Catholic Church. The group promoting this concept acknowledge this and want to stress that they are NOT protesting the mass, they simply would like attendees to make a contribution. As of now, the church is refusing this request.

I think the survivor group has a great idea. I have heard some argue that doing this is tantamount to absolving the church officials of the responsibility of providing restitution and putting the burden on parishioners who should not be blamed for what happened. My opinion is that giving a contribution is something every Catholic, and in fact, any caring person, should do. It acknowledges every person’s personal responsibility to make things right and do the “Christian” thing and it does NOT absolve the Church itself of any wrongdoing or responsibility to make restitution. We are now aware of the problem and should do what we can to make the situation better. The same rule should apply to the church itself, which did more harm in this matter and thus should do even more to make up for their sins. They certainly should take some initiative as a current civil law case illustrates how far behind Quebec is in dealing with the issue of sexual abuse.

A recent decision by Canada’s Supreme Court has called into question a part of Quebec’s Civil Code, the rules relating to lawsuits, as opposed to criminal cases. In criminal cases and in civil cases elsewhere in Canada, there is no statute of limitations for cases of sexual abuse - as it is acknowledged that many victims take years to be able to tell anyone and to seek justice. In Quebec however, there is still a time limit of 3 years to launch a civil lawsuit for damages related to sexual abuse. The case recently considered concerns a woman who was abused by a priest as a child and, over two decades later, sought damages. When it happened she did tell her parents, but when they confronted the church, the priest was simply moved to another diocese and the family was urged not to press charges. The priest involved pled guilty to criminal charges and is currently in jail, but the victim is also seeking civil damages. The Supreme Court ruled that the Quebec courts should not have dismissed the claim based on a time limitation without giving an opportunity for the claimant to explain the delay. The lawsuit will now go forward to trial. Oh and, by the way, the pedophile priest’s sentence for sexual abuse that occurred multiple times over at least two years, was 18 months in jail. There have been so many cases of sexual abuse of children in the last few years where the punishments seem to be far too lenient given the damage caused. In a well known case in Canada, former youth hockey coach Graham James was convicted of sexual abuse of his players, served a short sentence and, when new accusations were raised by other hockey players, it was revealed he had been granted a pardon, wiping his criminal record clean, and had moved to Mexico. Fortunately he did return to Canada last week, and was arrested on new charges stemming from the recent allegations. I could go on, but it will get me too depressed and I think you get the idea.