Before I get on to my post, I would like to add a further comment related to my last post. This week a Rutgers university student, 18-year old Tyler Clementi, committed suicide after some twisted individuals secretly taped him having gay sex and posted the video online. This is not an isolated incident. Just this month, at least four teens have ended their lives because they were being bullied or otherwise harassed about being gay. There have been several other incidents earlier in the year. I feel a little conflicted about even mentioning this because it is well known that media reports of suicides often lead to spikes in the suicide rate. Imitative behaviour and such. In this case, however I believe it is more important to tell the story so we can get the message out that bullying hurts and sexual harassment is NEVER acceptable. Let us remember Tyler Clementi and the other young people who were driven over the edge by cruelty. And I’ll say again what I said last time. Things WILL get better so PLEASE don’t give up. If you suspect someone you know is contemplating suicide, a site that can be a help is The Trevor Project. They also have a toll-free hotline (only available in U.S.).

This week there was an important event in Jewish history that took place in Montreal. On Monday afternoon, a chestnut sapling was planted near the Jewish Community Centre and Holocaust Memorial Museum. The significance of this little sapling is that it was grown from a chestnut from the Anne Frank Tree.

For those who do not know, Anne Frank was a teenage girl (originally from Germany) who was forced into hiding from the Nazis with her family in an attic in Amsterdam, the Netherlands for two years, until they were discovered and sent to a concentration camp, where she died. Years later her father Otto, the only one of the family to survive, found her diary and published it. Since then it has become famous around the world, translated into myriad languages, and made the Holocaust very real for people who would not otherwise have had any understanding of it.

In her diary, Anne makes mention multiple times of a large chestnut tree that grew in the yard behind the workshop, above which she and her family were hiding. It was one of the few visions of the outside world to which she had access during this time. She was able to take comfort in its beauty and majesty. In the decades following the war, the tree has remained as Anne’s attic hiding place was transformed into a museum, the Anne Frank House. At over 150 years old, the tree was thought to be one of the oldest in Amsterdam. A couple years ago, it was discovered that the tree was dying, consumed by fungus and parasites. The tree was originally going to be cut down, but protests succeeded in saving the tree for the time being. A steel support structure was built to keep the tree standing. Unfortunately, last month a strong wind storm finally toppled the old tree. As it was known the tree was dying, over the past two years, many saplings have been grown from the tree’s chestnuts, to be planted in many locations around the world. Many were planted in Amsterdam and other places in Europe, and one was planted on the White House lawn in the US. This sapling recently planted in Montreal is the only one in Canada. Montreal was chosen because of the sizeable population of Holocaust survivors and of the Jewish community in general.

I have already been to visit the tree. I could not get as close as I would have liked, as the museum and the community centre in which it is housed have very limited hours this week, due to the holiday of Sukkot. Therefore I could only see the tree at a distance through a gate. I was still able to get a couple decent pictures which I am sharing with you here. 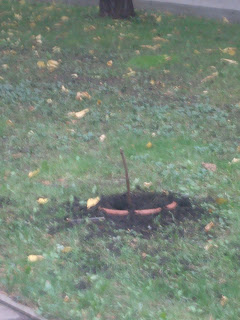 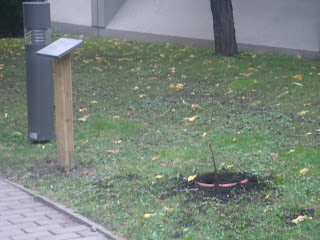 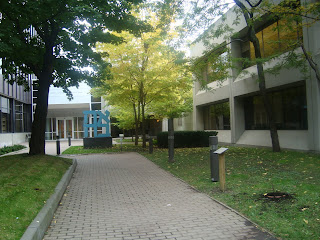 In my last post I also mentioned Canada’s charter of rights and freedoms. I have since learned that the United Kingdom yesterday enacted the Equality Act, which forbids discrimination based on age, gender, race, religion and sexual orientation, among other things. Good for them and it’s about time. Read the story at It's Getting Better.
Posted by Evan at 1:18 PM