Before getting into the second part of my post, there is something I would like to add to my description of the National Zoo. Near the entrance of the zoo, I noticed that one of the main paths going through the zoo was Olmsted Trail. On Mount Royal in Montreal, there is also an Olmsted trail, named after Frederick Law Olmsted, who designed the park back in the 1870's. I mentioned this in my post a few weeks ago. On my return I did some research and it turns out that, when the National Zoo was established in 1890, one of the three individuals who drew up plans for the layout of the zoo was the very same Frederick Law Olmsted. In his career, he also designed Central Park in New York, the US side of Niagara Falls, Yosemite National Park, and the grounds of the US Capitol.

The plans for Sunday involved a trip to Eastern Market, Washington D.C.’s largest farmers market, something I mentioned in a post before I left. As it turned out, the market was somewhat of a disappointment. It was smaller than I imagined and had little of interest beyond fresh foods. There was a craft market connected with the market but the offerings were uninspired. There were very few vendors selling ready-made food. The produce was very nice, including some fantastic local peaches, including the only flavourful white peaches I have ever had. There were also some very nice heirloom tomatoes and other quality fruits and veggies. Inside the historic market building, there were meat and fish vendors with an impressive range of products. The fish market in particular had a lot of exotic items, including baby octopus, eel and even a kind of blowfish (no, not that deadly Japanese one). There was also high quality meat and all kinds of smoked turkey parts. Back home we can only find drumsticks or wings and even those are not very common. They had these, but other parts as well, like neck. My companions and I had some sweet treats from a bakery, but they were hit and miss. I had a sweet potato bar with cream cheese icing that was fairly good, but their key lime cupcake had hardly any taste and the icing tasted like industrial lubricant. Overall, I still liked the market and, if I lived in Washington D.C., I would definitely be a regular customer. As a tourist destination, on the other hand, it left something to be desired. Perhaps I was expecting too much. Eastern market does seem inferior when I compare it to Jean-Talon, my regular local market. Jean-Talon is actually a huge market with amazing variety. I imagine most farmer’s markets would pale in comparison.

By now, we had some hungry people in our group, so we headed off in the general direction of Capitol Hill looking for a place to eat. It was then I found that a great many restaurants in D.C, close on Sundays. We then decided on the Mitsitam Café in the Smithsonian’s Museum of the American Indian. The museum is dedicated to providing information about all aboriginal cultures throughout the Americas, not just the communities based in the USA. 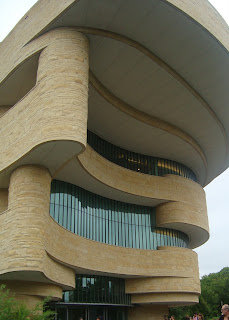 National Museum of the American Indian

I described the café and its food in the restaurant review post. After eating, a guided tour was beginning and we joined it. I thought it was going to be a tour of the museum’s exhibits, but it was actually primarily concerned with the architecture and how the building was designed in accordance with native belief systems. Not all in my group were interested but I found it fascinating. One of the interesting aspects was how important the cardinal direction points are to most native cultures. There was a rotunda topped by a skylight at the centre of the museum, the centre of the skylight lining up to a centre point on the floor. From that point, lines radiated out in the cardinal directions (north, south, east, west). If one were to follow these lines outside the museum to the edges of the museum grounds, one would find four large stones at each directional point. The north stone came from the Canadian Arctic, the east stone from Maryland, the south stone from Tierra del Fuego at the tip of South America and the west stone came from Hawaii. The Canadian stone was aged at billions of years old, and is one of the oldest known rocks on earth. The Hawaiian stone is of lava rock and is only about 500 years old. An interesting side note is that the Hawaiian stone is only on loan for 20 years, at which point it will be returned to Hawaii and replaced with another. At some later time, I will explain a little about Hawaiian religion and mysticism, which explains this unusual arrangement. All rocks were removed from native soil only with blessings and ceremonies from native communities and were placed at the museum in another aboriginal ceremony. Because of the time spent on the tour, there was not enough time to see the other exhibits. We stopped briefly at the Air and Space Museum to attempt to meet up with some additional family, but we missed each other and ended up calling it a day.

Monday was my flight home. In the morning, after checking out from the hotel. My mom and I finally went to do some birdwatching. The site we selected was the Kenilworth Aquatic Gardens located at the east end of D.C. To get there we used the D.C. Metro, which we had also used on Sunday. Monday we finally got that heat that Washington is known for. The forecast was 92 degrees F which is much hotter than I am used to (summer temperatures in Montreal range from high 70s to mid 80s), but there was massive humidity and bright sunshine on top of that, and we picked this day to do a lot of walking around outside! The main gardens featured a network of small ponds filled with lotus plants, water lilies and other aquatic plants. Beyond the gardens, there was a boardwalk that led into a wetland. On the other side was a trail that led to the Anacostia River. There were herons near the ponds and egrets along the boardwalk, but the heat and humidity was getting to me. I was also nervous about getting back to the hotel in time as I had a flight to catch. 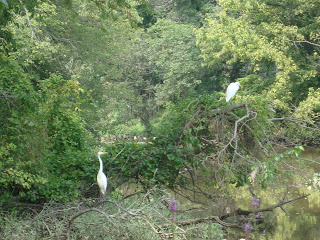 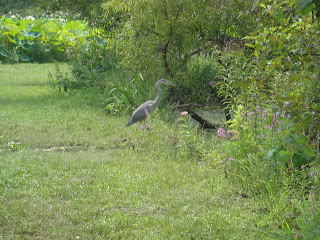 Great Blue Heron
On the way back, I suddenly became very glad that the D.C. Metro cars are air conditioned! Here in Montreal, the metro is not air conditioned and I never really missed it or saw the need. I couldn’t really understand why so many people, especially in the US, are of the opinion they cannot live without A/C. Now I understand. The weather we had on Monday is typical of Washington in the summer and it would be difficult to live through an entire summer of that kind of heat without air conditioning. I still don’t see the need in Montreal, where it only gets that hot a couple days each year and is more temperate most of the summer.

After returning, it was off to the airport for my trip back. It was an easy, uneventful trip back and I was glad to be back home, even though I did have a great time.
Posted by Evan at 2:45 AM