My Montreal - The Public Markets

Today I will be describing another of my favourite places in Montreal. This is not a typical tourist attraction but I would highly recommend visiting, even as a tourist. They are actually two places: Montreal’s public markets, the two largest and best being Marché Jean-Talon (my favourite) and Marché Atwater. I do a significant amount of my food shopping at the Jean-Talon market, but it is so much more than a place to buy my food (I would not be featuring a supermarket as a tourist attraction). I also believe that supporting local markets encourages better agriculture and a healthier relationship with our food. I will be talking about the benefits of farmers markets in my next post.

I believe that the Jean-Talon market is by far the better market, both for shopping and sightseeing. While the market is open year-round, it is far more impressive in the summer months. In the winter, the number of vendor stalls are reduced and the entire market is enclosed. In the centre of the market are all the produce vendors while shops are located in the permanent building on Henri-Julien street, as well as lining the streets on either side of the market. There are several types of produce vendors. Some primarily sell imported fruits and vegetables that come from suppliers, while others are farm stalls that sell their own product. I greatly prefer the latter, since the whole point of a market for me is to get locally produced food. 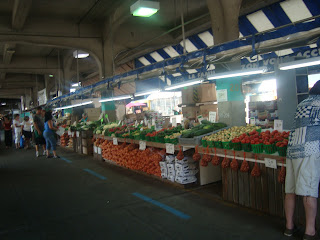 La Famille Lauzon, one of the better vendors


The shops sell gourmet and local meats, cheeses, fish, spices and other products. The best shop for visitors is le Marché des Saveurs, located on chemin Marché du Sud, which sells a large variety of jams, jellies, vinegars, and other bottled products from small producers throughout Québec. They also have a wine shop with local wines, ciders and meads. They also sell cheeses, local microbrewed beers and other specialty food products, all from Québec. Another favourite for non-perishables is Olives & Épices, located in the market building. This shop sells spices, olive oils and related products. The owner, Philippe de Vienne, has travelled the world and sourced the highest quality spices available. Though they can be more expensive than supermarket spices, the quality is far superior and I now purchase all my spices there. He also has an excellent book for sale about cooking with spices (only available in French) which has some good recipes and a great illustrated guide to spices. As well, another store a few doors down, La Dépense, sells international foods and has the same ownership. 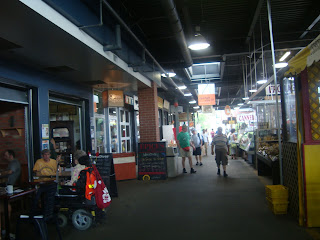 A note in relation to my last post. Jean-Talon market is fully wheelchair accessible.


There is also a Halal Butcher that seems to have the best price in the city for Québec lamb (which is very hard to find at all in supermarkets). There are several stores that sell gourmet sausages and an outlet of a chain that sells the best french fries in Québec (Frites Alors!). 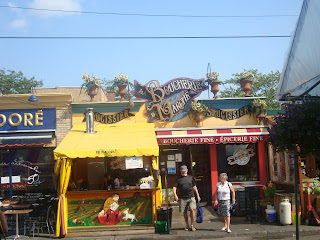 Best sausages in the store, best fries under the awning


As for the produce, I generally avoid the biggest stalls, which usually have big signs and aggressively promote themselves, because they are the ones that do not sell local, in season produce. By now, I have several favourite stalls where I make most of my purchases, but part of my routine is to walk past all the market stalls to see what is available before I go around a second time and buy my supplies. Some vendors have organic produce, but even the non-organic produce is generally of high quality. Pictured below is one of my favourite stalls. They are pretty much a farm stand in the summer, but in the winter they do sell a small selection of imported produce. 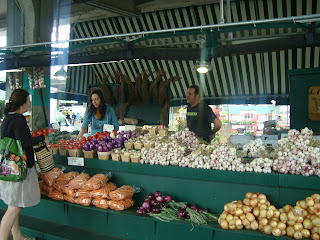 La Ferme des Moissons. I have gotten to know the man on the right, who runs the stall. Sometimes he'll give me a discount for large purchases, another benefit of being a market regular


Atwater market has much less appeal to me, especially where produce is concerned. First, it is a smaller market with less variety and can sometimes be more crowded because it is closer to downtown. The prices of everything there are much more expensive. Still, there are some reasons to go to this market. Inside the market building you will find an amazing selection of high quality butcher shops. Top grade organic beef, lamb from Kamouraska, Québec, locally produced foie gras and other excellent meat can be found. The price is on the high side, but it is not excessive given the quality. There are also gourmet food shops, one of which is my preferred store for truffle oil. Notice that the items I prefer to buy here are high-priced anywhere you buy them. Cheaper products can be found elsewhere for a better price. 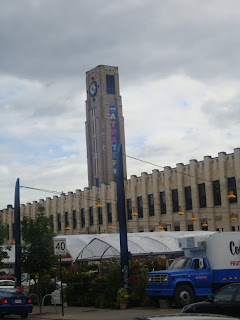 Stay tuned as my next post will discuss the importance of the farmers market in a more general sense.
Posted by Evan at 2:37 AM