In this post I will be reviewing things to see in Washington D.C. - but only the sights that I saw during my weekend trip. And don’t expect reviews of the standard tourist posts that most will mention. You won’t see anything here about the White House, Washington Monument, Lincoln Memorial, the US Capitol or the major Smithsonian museums. It was originally my intention to not even go to the National Mall during this trip. As you will see, this did not work out as I did see one sight on the mall and passed by the Capitol. But I will also mention a couple sights most of you have probably never heard of. 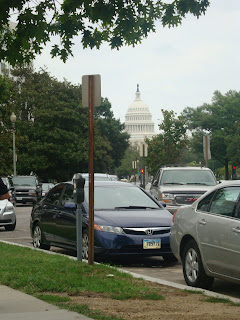 This is about as close to the capitol I will be getting on this blog.

On Friday, I toured the Adams Morgan neighbourhood of Washington. I mentioned this in my last post, but I would like to add that the architecture and public art in the area is quite interesting. It is an interesting place to walk in the daytime, and the nightlife makes it an exciting place to be at night. The pics from Google Street View I had in my last post give a good idea of the nature of the region. 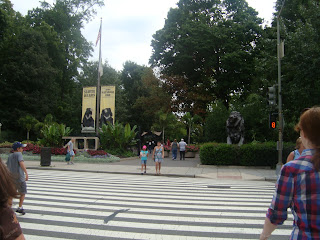 Saturday was very busy. This was the day of the wedding, so the afternoon and evening were occupied with important family events. In the morning, I went to the National Zoo, only a short walk from the hotel. The zoo is part of the Smithsonian Institution, which means that entrance is free and there were many volunteers around to explain things about the animals. I started with the Asian animals, including a sloth bear, an Asian bear whose claws look like a sloth’s. There were also some wild cats, otters, red pandas and, of course, the Giant Panda, long an important feature of the National Zoo. The Bird House has many exotic birds with amazing plumage. I also saw the lions and tigers, always a key element of any zoo visit. 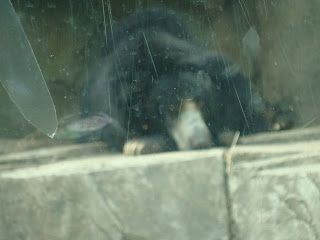 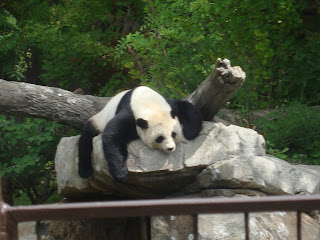 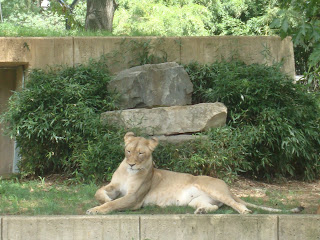 On the other hand, my mom and I found the Ape enclosure unsettling. There is a certain contradiction inherent the modern zoo. Many years ago, zoos simply displayed exotic animals with minimal concern for the animals’ welfare. They were enclosed in small cages and no effort was expended to ensure comfort. Attitudes have since changed and the public wants to see that animals, if they have to be in captivity, are at least being well treated. Currently, zoos are at the forefront of the conservation movement and are dedicated to aiding the survival of threatened species. However, zoos still enclose animals that would certainly be more comfortable in larger spaces. Many animals, having been bred in captivity, could not survive in the wild. Still, walls and cages of enclosures create kind of a discomfiting image. The gorilla exhibit at the National Zoo seemed to illustrate this. The enclosure was large and contained a climbing apparatus but that didn’t really seem to help. The problem is that gorillas and other great apes have so many similarities to humans that you can almost read facial expressions and I got the impression that the gorillas seemed to “know” that they were not only caged but being watched as well. Their expressions seemed to resignedly acknowledge the crowd of people watching and that really made us uncomfortable. This is not to say that I think the zoo mistreats the apes. The orangutans have a system of ropes strung up on high poles that they can use to travel from their indoor enclosure to a larger area. That is a very thoughtful and caring feature but it still kind of feels like seeing humans in a zoo. After seeing this and talking about it with my mom, we were both much less enthusiastic about being at the zoo.

We had planned to do some hiking and birdwatching in part of Rock Creek Park, a riverfront trail that runs adjacent to the zoo and stretches a long way in either direction. Unfortunately, we had spent so much time at the zoo, we only had enough time to get back to the hotel and change for the wedding ceremony. So instead we walked through Rock Creek Park from the zoo to the hotel, which also is next to Rock Creek.

The sights from Sunday and Monday will be posted either tomorrow or Sunday.

In other news, I have added a link to a new blog that has quite an interesting flavour. I have been caught up in Timmy’s story as of late and am pleased to add it to my list of recommended blogs.

Finally today, August 27, 2010, is a very important day in the lives of certain people in my real life and in my online life; two couples who are each celebrating anniversaries. Many of my readers know about one of the couples celebrating their first. The other couple is my mom and dad, who celebrate their 43rd wedding anniversary today. Congratulations and I love you so very much!
Posted by Evan at 1:13 AM