Guelph is a city that takes environmental stewardship seriously.  Guelph often takes the lead in green innovations to waste management and champions local food producers.  I think part of this is because the University of Guelph is home to an agricultural college, a veterinary college, and a food science department.  There are many farm and garden co-ops in Guelph and nearby and several festivals that celebrate local food.  Back on June 24, I attended the Local Food Fest, held on the grounds of the Ignatius Jesuit Retreat.  This is quite an interesting institution right on the north edge of Guelph that does a wide variety of things.  First it is a religious retreat, where people can get away and take part in spiritual workshops and other activities.  The Ignatius centre is also a farm that grows a wide array of crops, mostly on a small scale.  It is also a Community Shared Agriculture co-operative, where people can buy shares in the farm and receive a regular basket of the various foods grown there.  They also have many plots devoted to community gardens, where local residents can cultivate a small garden plot with whatever they wish.  There are also various community initiatives that the centre undertakes, mostly involving the environment and community service.


One thing that impresses me about the Ignatius centre is that, while they obviously have a particular set of religious beliefs and this is meant to be a religious and spiritual centre, they do not seek to impose their beliefs on anyone, even those who attend the spiritual retreats.  They claim to welcome people of all religions and beliefs and from what little I was able to see, they live up to that.  The most obvious values and purposes they seem to espouse are not so much their religious principles, but more the concepts of environmental stewardship and responsible, sustainable agriculture.  Everything they do reflects on being environmentally aware.  So it is a natural that this is the location for the Local Food Fest. 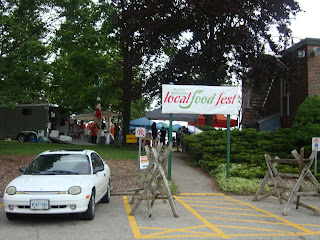 While this was not a particularly huge event, there were many different things going on.  One aspect was like a one-day farmer’s market, with local food purveyors selling their product. As this was late June in southwestern Ontario, there were strawberries, some lettuce, radishes, green onions and only a few other things that were fresh from the ground.  Also many restaurants set up booths, and provided various good lunch and snack options.  There were other stalls selling bread, honey, preserves and other stuff.  There was even a local kitchenware store represented.


There were also workshops where people could learn how to start up various gardening-related projects.  I sat in on part of a workshop about growing your own food on a small plot, designed for urban dwellers with only a small backyard to use.  Other workshops included raising backyard chickens, hobbyist beekeeping, building and maintaining organic soils, and other things.  There were also several cooking demos throughout the day.  Two that I watched were making kimchi and making sourdough, in which I was particularly interested.  This past winter I have started experimenting with making sourdough bread, and was definitely interested in picking up some more pointers.  The presenter was from a local bakery I like very much and sells at the local farmer’s market and he gave some interesting advice and gave some useful tips on maintaining a sourdough starter and how certain details in the breadmaking process affect the finished product.  It gave me some valuable insight and some strategies for the next time I do baking.


There were also tours of Ignatius farm available.  There were wagon tours and you could also walk their network of trails on your own.  There was also information about the programs run by the Ignatius centre.  Finally, there were also several live musical acts and play areas for the kids.

One aspect I like about this, and about any event that is supposed to be for the public good, there was no set admission fee.  Like foodstock last year, this was a pay-what-you-can event, with the suggested donation set at $2, which I think was sensible given what was offered.  The wagon tours carried an additional suggested donation of $2 and, of course, the farm and restaurant booths set their own prices for their products.  You could still get to this event, located on the edge of the city, even if you did not have a car.  The local airport limousine service partnered with the event and offered a free shuttle from downtown and a community centre.  I was thinking of using this myself but, since the weather was unsettled and I thought I might want to leave at a different time than the shuttle was scheduled, I did take the car and found there was plenty of parking.

I can certainly see why this centre is a spiritual and meditative retreat.  It is just on the very edge of the city so, even though it is quite easy to get to and close to many people’s homes, it is such a peaceful area on a large expanse of land.  There are hiking trails through their large property, including one through a wetland and another past ruins of historical significance.  Seeing the property for the first time gave me a great deal of perspective on a local furor over a development issue several years ago.  I might write a post about this, but several years ago, Wal-Mart decided they wanted to open a store near here and the way everything went down is one of the reasons I refuse in all circumstances to shop at Wal-Mart.

Anyway, it was quite the enjoyable day and a celebration of Guelph’s agriculture and environmental awareness.
Posted by Evan at 2:11 AM