Yes, I’m still here and the blog is still alive.  I am working on several things right now and haven’t been writing as much.  But I have a few more things in the works now and hopefully the posts will be a little more frequent.  I doubt I will ever be back to the nearly 2 posts per week pace I had back in the beginning, but I will try to post a little more.

Two weeks ago, I made a trip to Barrie, Ontario.  I will be attending Georgian College in Barrie starting this fall and I was there to take care of some business.  I was also there two months ago for a Preview Day when I toured the school and met people in my program.  Some elements of those visits may show up in a future post but for now here is a review of the restaurant where I ate on a Thursday for lunch - Painter’s Hall Bistro. 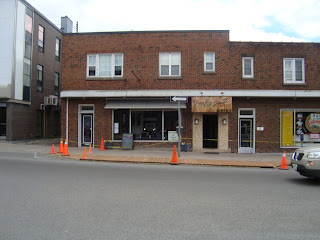 Painter’s Hall is a small restaurant that has been around for years right in the middle of Barrie’s downtown, just blocks from Kempenfelt Bay, around which Barrie’s core is wrapped.  At first glance, Barrie’s restaurant scene appeared to be rather underwhelming, and the content of online reviews seemed to indicate preferences for more pedestrian fare - in other words a dining scene like Guelph’s.  But I no longer have concerns - even if Painter’s Hall is in fact as good as Barrie gets, that is plenty good enough for me.


This was the best all around meal I have had in quite some time, and it was a lunch, a service that high end restaurants sometimes neglect.  On a first glance, the lunch menu seems ordinary, with nothing too daring or refined.  But the dishes themselves tell another story.  For an appetizer, I had seared scallops with pork belly, with some pickled carrots, a cider glaze and local microgreens.  I might consider doing some very slight nitpicking, in that I think, given the size of the two scallops on the plate, the portion of pork belly could have been slightly larger to create a more even distribution of the two proteins.  The scallops were incredibly fresh and flavourful, expertly seared and only barely cooked on the inside, making for a very elegant and impressive appetizer. 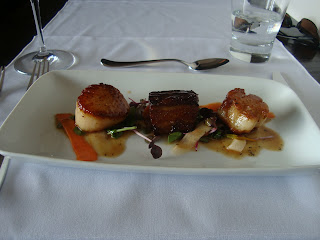 The main course was a chicken supreme (this is a skin-on chicken breast, boneless except for the first joint of the wing; it is also sometimes called an airline breast), stuffed with chicken forcemeat, roasted garlic, shallots and truffles.  It was served with barley pilaf, lingonberry jus, and local, seasonal vegetables.  I am usually reluctant to order chicken as a main, especially chicken breast, as it is so easy to overcook and be completely dry.  But it also rare that the chicken is the most expensive item on the menu, as this was, and I liked the accompaniments.  The perfect execution continued on this dish.  The chicken was perfectly seared, well seasoned and cooked to perfection.  Very moist and the stuffing was quite interesting.  At first it confused me a bit, but I believe it was because I hadn’t expected the truffle, which I assume was black truffle, which I have not had very often.  Also I had expected the roasted garlic to be more dominant, but it was really only a background flavour.  The barley was perfectly done and delicious, and the sauce was a smart match with the chicken.  I was impressed as it seems almost all the vegetables on the plate were local, particularly impressive as we were not quite yet into June.  Asparagus was a natural as it is asparagus season, but I was pleasantly surprised to also see some fiddleheads on the plate.  Another early spring vegetable, this is the shoot of a particular fern, so named because the edible portion is shaped like the head of a fiddle.  Another well-conceived dish, executed to perfection. 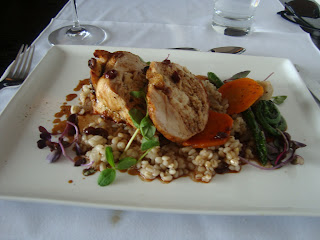 Finally dessert was best of all.  A warm flourless chocolate cake with the garnishes kept to a minimum - just a little raspberry coulis, mango coulis and a little fresh fruit.  Also topping the cake were some cooked (or maybe macerated?) raspberries and some poured sugar garnishes as well.  Well now that I write it, there appear to be several garnishes, but they were so minimal that it seemed like there was very little there other than the cake (the picture explains what I mean a bit better), which was absolutely the correct way to go.  This cake was completely flawless, the best course of the day, even with such a high standard already. 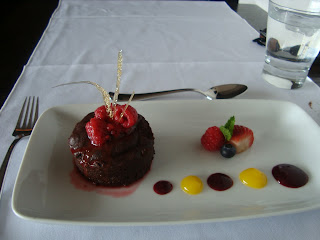 While there seemed to be only one server on duty for lunch, the service was exceptional.  Merv was very personable right from the beginning.  She was clearly selling the menu, but only selling to what I already wanted.  That is the sign of a truly gifted server.  As I had come in at the tail end of a slight rush, by the time the mains arrived I was the only customer still eating in that room.  She pointed me toward a wine that was decent quality considering I was limited to house wine (as I was ordering only a glass).  She was also very perceptive, noticing that my inquiries and compliments indicated some substantial food knowledge and I did indeed tell her I used to work in the industry.  And I also got to meet Greg Rennet, head chef of Painter’s Hall Bistro, who came out to my table.  I was actually contemplating asking whether the head chef was in the kitchen, because the execution had been so flawless it was actually un lunch-like, and indicated to me someone particularly skilled was running the kitchen.  And indeed I was right so I was able to convey my appreciation directly to the chef and talked with him for a few minutes.  (You may have noticed that I have not previously mentioned any names in other restaurant reviews.  Often I don’t pay attention to remember the names, especially as its not terribly important to me.  Here there was a very familiar and personal atmosphere, so I believe that naming names makes sense here).

So I know there is at least one excellent restaurant in Barrie.  As with many other places I have reviewed, the prices can be a little steep, but they use top quality products, make everything in house, and deliver extraordinary quality.  And there is always lunch for slightly lower prices.  When I move to Barrie in the fall, I will definitely be returning to Painter’s Hall, this time for dinner, so I can fully experience the best of what they have to offer, which already looks so good.