In Praise Of Brisket

Brisket is one of my favourite cuts of beef. It may not be the most familiar to many and even to those who know it, it can seem intimidating. There are a few reasons for this. First it can be a very tough cut and requires a very long cooking time to be edible. Also the uneven fat marbling throughout a single piece can be very difficult to manage, being either impossibly fatty or bone dry. And finally, unlike other stewing meat, brisket is usually sold in larger single pieces. But it has so many different uses and such an amazing flavour and texture, it is actually one of the most versatile, if you know how to use it.

Probably the easiest and most common use of brisket is in a pot roast. Pot roasting is a cooking technique similar to stewing and braising with only a few key differences. In a stew, the meat is cut into pieces and cooked in liquid for a few hours until tender, at which point it is ready. With a pot roast, a single large piece of meat is cooked in a similar liquid for a few hours until tender, but then there is an additional step. At this point, the meat is removed from the sauce, cut into thick slices, and returned to the pot and cooked for an additional period of time. Later in this post there will be a recipe. Pot roast is very much a European peasant dish. The poor people would only get tough cuts of meat to use as roasts, so the only way to make such roasts tender is to braise them. Brisket is a cut very well suited to pot roasting as the fat is distributed unevenly, which means the lean pieces could be dry inside. The slicing and additional cooking once braised will allow the meat to moisten after it has tenderized. Brisket is very prominent in Jewish cooking for two reasons. First, Eastern European Jews were definitely peasants so all they had were cheap cuts of meat. Also Jewish dietary laws only allowed the use of cuts of beef from the front half of the cow. Brisket is a large cut (so it could feed a lot of people) from the front half of the cow (it is actually at the very front of the stomach just behind the front shoulders) that, because it is tough and so difficult to cook, was not very expensive. Therefore brisket became a Jewish specialty. 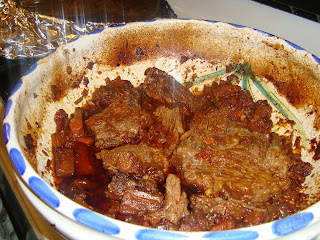 Brisket Pot Roast
Brisket is also found in Texas barbeque. While most Southern barbeque is centred on pork (ribs, shoulder, whole hog), in Texas beef is and always will be king. While I greatly enjoy beef ribs, the favoured cut for Texas barbeque has got to be brisket. Here, brisket’s greatest advantages are the large fat cap and the thick veins of fat found within the meat. This allows the meat to baste itself as it is cooked on low, dry heat for hours on end. The standard method is to apply a dry rub to an entire brisket and put it in a pit-style smoker for many hours. For most people, this is not practical to make at home, but a little creativity can get you a reasonable result at home. 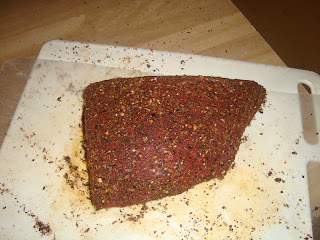 Dry-rubbed brisket ready for the barbeque

For another great use of brisket we return to Jewish cuisine. Jewish delis in Montreal have a marvellous creation that is Montreal-style Smoked Meat. Other deli staples featuring brisket include corned beef and pastrami, but smoked meat is the best of the best (to the New Yorkers who claim otherwise, as is the case with bagels I merely suggest you come to Montreal and have the real thing). To make smoked meat, briskets are cured with various spices and curing salt for several days then smoked, and finally cooked by steaming. Many of the key elements of the procedure use industrial equipment and others are kept secret, so I don’t really know how one would make this at home. Even worse, you really cannot find proper smoked meat outside of Montreal, what is available elsewhere is a poor imitation. The best way to experience it is take a trip to Montreal and eat at Schwartz’s Montreal Hebrew Delicatessen. You can also buy a full piece of fully cooked smoked meat in a vacuum-sealed bag that can be reheated and sliced at home by placing it on a rack in a roasting pan with water at the bottom and reheat covered in the oven. Maybe in a future post I will post an old review of Schwartz’s I started but never finished. 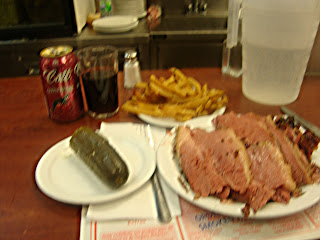 The Smoked Meat Plate at Schwartz's

Most of this recipe follows the procedure for making a stew I posted back on December 13, 2010. In short, first season the brisket on all sides with salt and pepper then heat the widest pan you can find with some oil and sear the entire piece on all sides, then set the meat aside. Saute the vegetables and the tomato paste, add more oil and flour and, after cooking a minute or two, add the liquids and boil to reduce slightly, then add the seasonings. Put the meat and sauce together in an ovenproof pot and put in a 275 degree oven for about 4 hours, or until fairly tender. Then take the brisket out, slice it into ½ inch thick slices and return the meat to the pot, making sure to submerge them in sauce. Return to the oven and cook for 30 minutes more then serve with potatoes or something else that will absorb liquid. 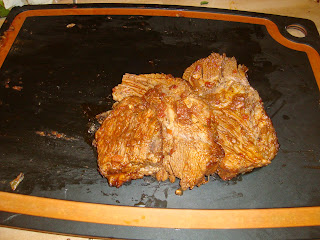 slice the brisket when it is pretty much fully tender
This post will be continued in a day or two with a recipe for barbeque brisket that can be made at home with reasonably common household equipment.

Before I finish this post, I need to make note of a sad passing within the blogging community. For those of you familiar with Amar's World may know about CJ, a fellow blogger who gave great advice and assistance to Amar and created Amar's Brotherhood, of which I am proud to consider myself a member. Well, CJ passed away on Tuesday from a brain tumour. CJ was a man of great humour with a big heart and I got the chance to chat with him on occasion in various places over the last couple years. We will all miss him.
Posted by Evan at 4:25 AM