How To Make A Stew

Stews almost always evoke memories of childhood. The thing is sometimes these memories are good and recall excellent meals, and sometimes they are bad and eating them was seen as a chore, if not even a punishment. I think this is because, although everyone at least tries to make stew, it does actually require some skill to produce well. The making of a stew transforms inexpensive ingredients into a magnificent product with a long period of time and careful cooking. I will give you the general method of how to produce a good stew as well as some guidelines for recipes.

A quick rule of thumb - if it makes a good steak, don’t use it for stew. The tender cuts of meat are not only too expensive to use in a stew, many of them do not have enough meaty flavour to make good use of them. The tougher cuts of meat typically are marbled with a fair amount of intramuscular fat and connective tissue that takes a couple of hours of cooking to break down. But when it does break down, the meat becomes very tender and soft. My favourite piece of meat is beef or veal cheek. This can be difficult to find so, when it is not available, I choose either short rib or blade, which is a cut from the shoulder. Chuck or sometimes cross rib are also decent options. Cuts of meat from the hind quarters are often sold as pot roasts or stewing meat, and generally have the term “round” in their name, such as top round, bottom round, eye of round, etc. I generally avoid these cuts, as they are both tough and lean cuts so they are not flavourful enough for stew. Similar rules apply to meats other than beef, but this is what I will focus on as it is the most common. When trimming meat for stew, most people remove all the fat and cartilage from the meat. This is not necessary and it deprives the stew of good flavour. 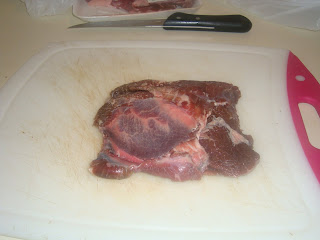 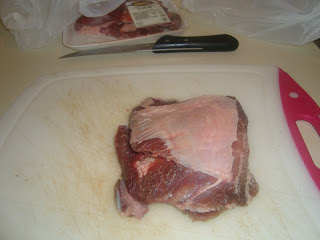 The white layer is silverskin, not fat
Silverskin, shown on the back of the cheek here, should be removed, and if the fat is really thick it should trimmed back a little, but most connective tissue will break down and a little bit of fat is a good thing. Then cut the meat in equal size pieces. Smaller pieces will cook faster, but I find the texture personally more pleasing with large pieces. It also makes the browning stage go faster.

Almost any vegetable will work in a stew. Since the meat takes a long time to cook, and because I make stews more often in winter, I tend to use hard, winter vegetables, such as carrots, parsnips, squash, turnips, beets or similar hard, dense vegetables. These vegetables should be cut into fairly large chunks so they do not cook too quickly and can be added at the beginning. If most of these vegetables are overcooked it will not be too problematic. It will not have the ideal texture, but should hold together and the flavour will be there. Squash is an exception, as it cooks a little faster and tends to break down into mush. Potatoes can be a good option as well, but they will release a fair amount of starch and also cook a little faster. For these ingredients, the meat will need to be cooking for at least 1 hour before adding these vegetables. Other, quick cooking vegetables need to be added towards the end of the cooking process. Most often I use mushrooms, which I add a half hour before the end of the cooking. You can use any variety of fresh or dried mushrooms. Any other tender vegetables you would want to add, such as peas, corn, beans, etc., should be added in the final stages of cooking, as it is important that they maintain their texture. Other options includes greens such as spinach, collards, swiss chard or Asian greens like bok choy. Collards and similar deep greens should be added with at least 1 hour to go, while spinach just needs to be wilted at the very end. I avoid cabbages as I do not like how they taste with long cooking. 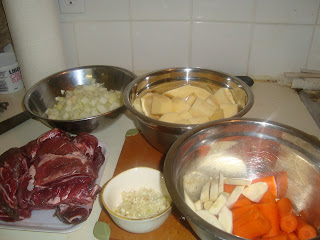 This is a very important step that is often skipped, resulting in weak flavour. When meat is exposed to very high heat, chemical reactions take place that brown the outside of the meat. The process is similar to, but not the same as, caramelization and is called the Maillard Reaction. Some chefs and food “experts” claim that searing meat seals in juices. You should know that this is not true at all. As meat cooks, water will always be expelled from the meat. When high heat searing, you will not see the water because it is evaporating instantly. While searing does not retain more meat juices, the real reason for doing this is that it generates deep flavour than can not be accomplished through stewing alone. The basic rules for searing or browning meat are to keep the heat high, don’t move the meat around in the pan, and don’t crowd the pan. Each piece of meat should only be moved to brown another side of the piece. If the pan gets too dry, add more oil. 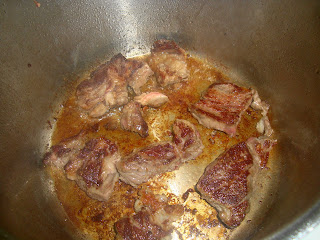 This is what properly browned meat should look like - note all the space around each piece
An additional step I like to do after browning the meat involves searing parsnips. I often use parsnips in my stews and I find the flavour is much better if they are caramelized. So I cut the parsnips on the bias so there is a lot of surface area and brown them for about 30 seconds per side. 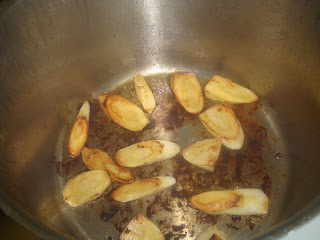 When the meat is finished browning, add onions to the same pan and saute the onions until soft. At this point, add garlic and cook for about 1 minute until it is fragrant. If you are adding tomato paste and/or paprika, they should be added next and cooked for 1-2 minutes. Then add another tablespoon of oil and 2 tblsp of flour and cook, stirring constantly, for another 2 minutes to cook the rawness out the flour. Then slowly add red wine, stirring to make sure the sauce thickens evenly. Add stock or other liquids, if using, and bring everything to a boil. Any other spices and any dried herbs should be added at this point, as well as salt and pepper. Taste the sauce - it should be well balanced but very powerful. Remember that lots of liquid will be released from the meat and vegetables, which will dilute the sauce. Add the meat back to the stew, along with the longest cooking vegetables, particularly the carrots. If you are using parsnips without browning first, which I do sometimes, add them now as well. Many stewing and braising recipes will tell you cover the food entirely with liquid, or at least 2/3 of the way up. This is not necessary. All that is needed is for everything to be coated with some liquid going up maybe halfway. It will probably seem much too thick but, with the liquid that will be released from the meat, there will be plenty of liquid at the end. Just be careful when bringing the mixture to a boil that you keep mixing and make sure nothing burns or scorches. Once the stew goes in the oven this is no longer a concern. 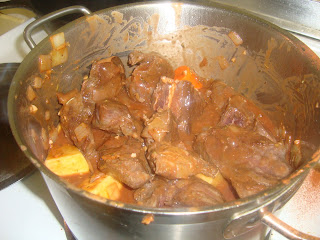 Yes, there is enough liquid in here 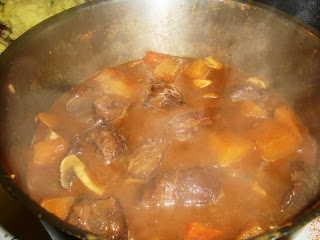 It became this with no liquid added

Bring the stew to a boil, then put in a 275 F oven to cook. Be sure that the cooking pot is oven safe and has a tight-fitting lid. Depending on what meat you used and the size of the pieces, it will take anywhere from 2 - 6 hours, but I have found that most stews I make require about 4 hours of cooking. If you are using vegetables like squash or beets in the stew, add them about 1 hour into the cooking process. At about the 2 hour point, you should check the doneness of the meat for the first time. Press the meat against the side of the pot with a wooden spoon. If the meat is hard and rubbery, it is not ready yet. When it is ready, the meat should pull apart with direct pressure from the spoon. When the meat is almost ready, I often add chopped mushrooms. Sometimes it is a good idea to saute the mushrooms first, but I don’t bother. When the meat is done, check the seasoning and add finishing touches. Possibilities include fresh herbs, tender vegetables or liqueur, such as brandy. Some vegetables you add will benefit from different cooking times, which would require careful timing and a knowledge of how much more time the meat will need. For someone just starting out I recommend a very simple version, based on the French classic Boeuf Bourgingnon.

Trim meat and cut vegetables. Sear the meat, then parsnips if you want. Add onions, then garlic, then tomato paste and paprika as directed above. Add more oil and flour and cook, stirring, for 2 minutes, then add wine and beef stock. Add the herbs and spices, salt and pepper and taste. Then return the meat to the pan along with the carrots and parsnips. Bring to a boil, put a lid on the pot and put it in a 275 degree oven for about 4 hours or until meat is tender. With ½ hour left in cooking time, add mushrooms. When meat is tender, add chopped parsley, if using, and serve over mashed potatoes. 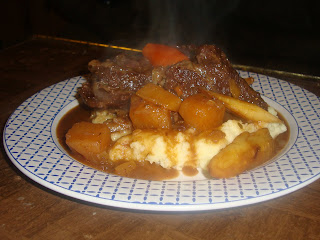 Pretty much the recipe above with rutabaga (a form of large turnip) added
Now you can see that, start to finish, my stewing method takes a lot of time. That said, I believe this is an excellent dish for entertaining. The reason is almost all the work involved is done hours in advance, leaving you free as a host. Because it is cooked slowly, there is a substantial margin for error, meaning that a little extra time won’t hurt anything, in fact the flavour will probably improve. Of course it tastes amazing the following day, so you could even do much of this a day ahead and just reheat and finish it. This also works fairly well as a pot luck, as it reheats fairly well and only needs one pot. I have probably already said this, but it deserves another mention. The possibilities for variation are endless - in the meat, the vegetables, the liquids and the seasonings. 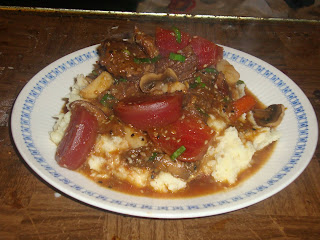 This stew had Asian seasonings (like oyster sauce, soy and sesame) was cooked with beets and was finished with green onions.
In future I may post recipes of other stews, or braised meat dishes that I prepare using the same methods. I will most likely refer back to this post, as this is the general method behind many meals.
Posted by Evan at 2:15 AM