A Visit To Ottawa

A little while ago I spent some time in Ottawa for a family event. Ottawa is Canada’s capital and has great things to see. There are some obvious sights to see and some others that are not as evident. As I have family in Ottawa, I have been there many times. The most exiting time was probably this past weekend, the Canada Day weekend. There are big celebrations on Parliament Hill and a festival in nearby Major’s Hill Park and of course fireworks shot from the Alexandria bridge that runs behind the Parliament Buildings. And this year the Royal couple - William and Kate - were in Ottawa for the event and the Queen was visiting the year before. I recall last year I posted about how sad and pathetic Montreal’s Canada Day celebrations seemed to be, and that had a lot to do with my memories of what this day is like in Ottawa. A modest parade seems inappropriate when you compare it to the massive celebration that takes place in Ottawa.

If you recall my posts about my trip to Washington D.C. last year, I made a point of not mentioning any of the most popular tourist attractions, mostly steering clear of the National Mall. Ottawa is a different matter, as I am Canadian and this is the capital of MY country. That is why my first recommended sight to see in Ottawa is Parliament Hill. This is the home of Canada’s government and is an iconic image for the country. Tours of the Parliament Buildings can be taken free of charge and you may even see Canada’s government in action (or whatever it is they are doing). In the centre of Parliament Hill is the Centennial flame. This fountain was constructed as a project to mark the 100th anniversary of Canada in 1967 and consists of a fountain with a gas flame constantly burning since it was first lit in 1966 coming up from the centre. 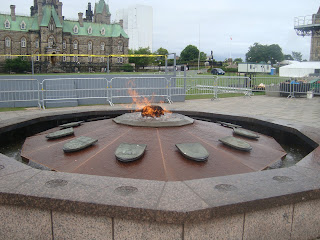 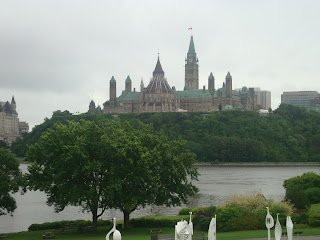 Parliament Buildings seen from the back. Pic was taken on grounds of the Museum of Civilization (see below)
There are various other things to see that relate to Canada’s government, some more interesting than others. Some places worth a visit may include the Supreme Court of Canada or Rideau Hall, the residence of the Governor General. Canada is part of the British Commonwealth and, as such, Queen Elizabeth II of England is still our head of state, though all state functions are handled by the Governor General, who is appointed by the Prime Minister. Regular tours of Rideau Hall are available and the grounds are also worth visiting. There are many trees on the walk up to the house, planted by various dignitaries from around the world, including John and Jackie Kennedy, Nelson Mandela and many Royals. The most recent tree planting was last weekend by William and Kate, the Duke and Duchess of Cambridge. 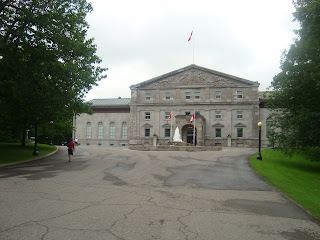 Rideau Hall
There are several museums in Ottawa as well, and probably two of the more worthwhile are the National War Museum and the Canadian Museum of Civilization. The War Museum is Ottawa’s newest museum, built about 5 years ago on contaminated land that had to be cleaned up at great effort and expense. In keeping with the decontamination project, the building was designed with sustainablility and energy efficiency in mind. It even has a “green roof” so that the building is returning clean air to the environment. In addition, the shape of the museum is reminiscent of an army bunker and on a wing of the roof, there are a series of windows that spell out the message “Lest We Forget” in Morse Code. 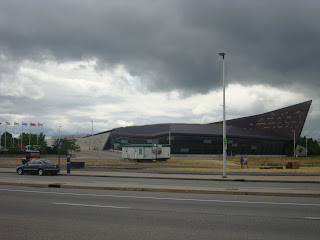 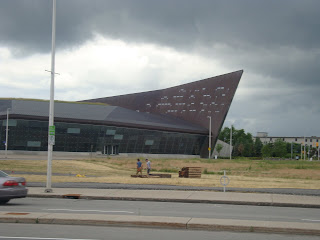 The museum of Civilization is very hard to completely describe. It tells the social history of the people of Canada. There are often exhibits relating to native peoples and to specific ethnic groups. There is also a Children’s Museum that teaches kids about Canada and the world with lots of activities and fun stuff. Even kids that don’t like museums will like this, because it is almost as much play centre as museum. There is also an IMAX theatre. This museum is located across the river in Gatineau, Quebec. The grounds have an amazing view of the Parliament buildings, which sit directly across the river.

Back on the Ontario side is the National Gallery of Canada. This is Canada’s premier art gallery and houses many masterworks and travelling exhibits. On this most recent trip I found something fascinating just outside the entrance to the gallery. It is a piece of public art entitled “Maman” (French for “mother”). It is a 30 foot tall spider made of cast bronze, complete with an egg sac containing 26 pieces of white marble to represent her eggs. The artist did in fact use her own mother as inspiration for the piece, which raises some rather disturbing questions. Supposedly the piece is intended to evoke the fierce protectiveness of a mother but also a sense of entrapment. I guess she had some “mommy issues” to work out. 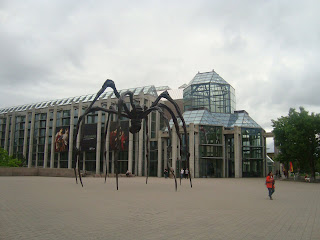 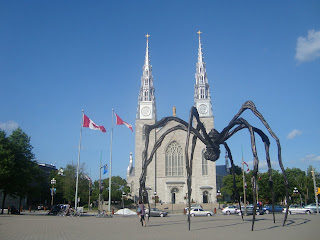 Take note of the scale of this sculpture in both pictures. I tried to make sure there were people or cars in the frame to give some indication of the size. In the second picture, I just thought it was an interesting composition. The church is the largest and most ornate in Ottawa
Another strange piece of sculpture nearby is located beside the United States Embassy, an imposing and rather unattractive behemoth of a building on Sussex drive. The sculpture, pictured below, is called “Conjunction” and supposedly represents the close ties between Canada and the United States and “a joining of individual parts into a coherent and unexpected whole”. Maybe I’m just uneducated about the finer points of interpretive art but to me this just looks like a bunch of metal welded together with no coherent purpose and just looks ugly and pointless. That is certainly not the image one would likely want to evoke when celebrating the bonds between our two countries. Well, take a look and see what you think. Maybe it really is a work of genius and I’m just some philistine. 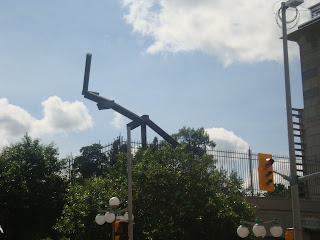 Brilliant or ridiculous? Comment and tell me what you think.
In this same area is one of my favourite places in Ottawa. For regular readers, it should come as no surprise that this place is yet another public market. In some ways, the Byward Market is much like other markets that I love and visit regularly, wherever I happen to be. But in Ottawa, the market encompasses more than just the market building and surrounding vendor stalls. Like at Jean-Talon in Montreal, there are permanent stores selling meats, cheeses and other food-related items. But the Byward Market distinguishes itself by also housing the largest concentration of bars and restaurants in the city. Some of the city’s most vibrant and interesting restaurants are located here, as are more pedestrian offerings. I will be writing an upcoming review post of my dining experiences during this trip, including one restaurant in the Market. There are also upscale boutiques for those who love shopping for fashions (at least I assume these stores are good - not really my area of expertise). As for the market itself, the volume of offerings cannot compare to Jean-Talon, but I would compare it favourably with Eastern Market, which I visited in Washington D.C. last year and it is also better than most of the markets in my local area. So I suppose this would likely make it one of the better markets I know of. 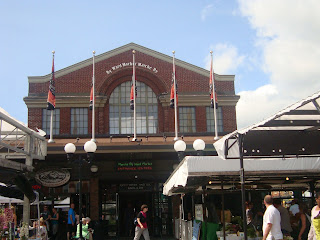 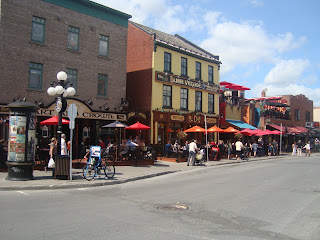 Streets in the Byward Market are lined with restaurants and, like this one, pubs

There are many festivals in Ottawa. Aside from Canada Day there are many must-see events. The city goes all-out for the Tulip Festival in April. Like most other cities, there are jazz and blues festivals during the summer. While these pale in comparison to Montreal’s, especially when it comes to size and enthusiasm, they still attract good performers and make for an enjoyable activity should you happen to be in the city at the time. A block from the Parliament Buildings, the Sparks Street Pedestrian Mall has some noteworthy festivals, including a Busker Festival (buskers = street performers) and a rib and chicken cook-off (more on that in the restaurant review post). Though Canada is not often seen as an attractive tourist destination in the winter, February’s Winterlude is an event not-to-be-missed. Once the weather gets cold enough, the Rideau Canal is transformed into the world’s longest skating rink. Some people who work downtown will use the canal to commute to work on skates while the skateway is open.

In summer, the Canal is impressive too. You can take a boat tour along the canal or go from the start of the canal and take a tour along the Ottawa river. You can visit the locks at the entrance to the canal and, if a boat happens to be coming through, you can watch the canal in action as the locks are raised and lowered to move the ships through. In the same area is the Bytown museum, which tells the story of Ottawa’s early history. There is also the Chateau Laurier, one of Ottawa’s oldest luxury hotels. The hotel was financed by Canada’s railway, headed at the time by an American businessman. When the hotel was scheduled to be opened in 1912, this man was returning to North America to open the hotel but happened to be crossing on the Titanic and he did not survive. It is said that the 5th floor of the hotel is haunted to this day.

One attraction in Ottawa somewhat off the beaten track is the RCMP Musical Ride at the RCMP Stables in the neighbourhood of Rockliffe. This is a contingent of the Royal Canadian Mounted Police (Canada's federal police force) that displays the RCMP's tradition of precision horsemanship. They execute very difficult coordinated manoeuvres set to music. The musical ride spends a lot of time touring the country performing at fairs and equestrian events, so they only perform a few times a year in Ottawa at the stables but whenever they do perform, such as last week when I was there, it always draws a large appreciative crowd. 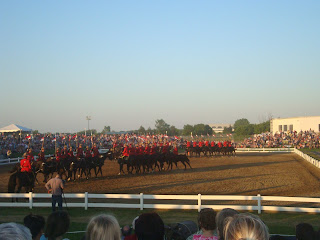 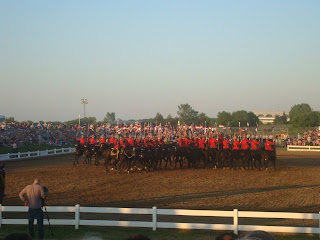 It's hard to really show the skill in the musical ride with still photos. But these should still give you some idea of what they do.

In an upcoming post (or posts) I will publish some reviews of restaurants I ate at during this stay in the nation's capital. I realize I have not been posting much since I left Montreal, but living at home has altered my schedule more than I thought it would. I am now trying to make time dedicated to writing so I hope you should see more posts. There have also been some recent developments on the food side of my blog and, once they are official, I will be able to tell you about them.
Posted by Evan at 3:18 AM

Email ThisBlogThis!Share to TwitterShare to FacebookShare to Pinterest
Labels: travel