Spring here in Canada has been colder and wetter than usual but it finally looks like summer is finally getting near. That means it's grilling season! When I was living in Montreal I did not have access to a barbeque but now living at home with my parents I have that option. This is a recipe I have been making for a long time. I got the basis of this recipe from David Rosengarten, one of the TV chefs from the early days of the Food Network, almost a decade ago. While you can modify the amount of heat to your tastes, this IS Jamaican Jerk, so it does need to have some heat to it.

3 fresh scotch bonnet (also known as habanero) chiles, seeds and veins removed OR
2-3 Tbsp scotch bonnet hot sauce OR
as much as you can stand of either

This recipe requires some time, planning and some mess, but is rather simple to prepare, despite the number of ingredients. The recipe is better with fresh chiles but will work well with a hot sauce made from scotch bonnet peppers that does not have much other flavourings. When working with the fresh chiles, it is recommended to wear gloves when removing the seeds and veins. Scotch bonnets, a variety of Habaneros, are among the hottest peppers on earth and if you put your hand up to your face or, god forbid, your eye, it will be most unpleasant. If you have particularly sensitive hands these peppers might even irritate your hands. There is far more heat in the seeds and the ribs or veins (the white parts attached to the side of the pepper) so it is best to remove these. The flesh has less heat and all the flavour, so if you want more heat, don’t add the seeds, just use more peppers.

Chop the onion and scallions very roughly and put them in a food processor with the oil, garlic and ginger and puree until there are only a few chunks left. Add the chiles and process again. Add the sugar, vinegar and thyme and pulse to combine. Then add the spices, followed by the remaining ingredients. I do this in stages rather than all at once so I can keep checking the flavour balance and whether there is enough heat. It should seem just a bit too spicy, as this is a marinade. It may not look overly attractive - in fact it will probably look like greenish, brownish sludge as you can see from the pictures. The importance is the taste, though. When the marinade is done, transfer it to a large mixing bowl and cut up the chickens. 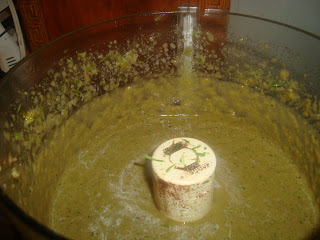 In a previous post, I described how to cut up a whole chicken for frying. The instructions for this application are mostly the same, but I will post it again because now I also have pictures of the various steps. For this recipe it is even easier because there will only be 4 pieces per chicken - I am not dividing the leg into drumstick and thigh, each side of the breast will stay as a whole piece, and the wings will stay attached to the breast. So all I am doing is quartering a chicken and removing the backbone. To disassemble my chicken, I take the legs off first. Cut down between the leg and breast then push up on the thigh until the thighbone pops out of its joint. Then remove the leg by cutting along the ribcage and through the joint. 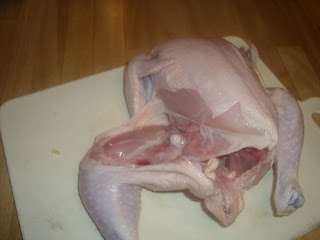 Then I cut down each side of the backbone to remove the back, leaving the whole breast. 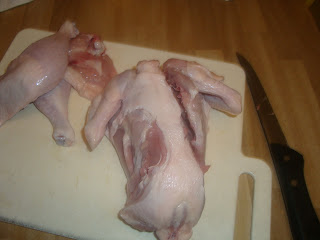 Using a cleaver, I chop through the keel bone (the big thick bone running down the centre of the breast). Now we have a quartered chicken, plus the backbone, which can be frozen and saved to make chicken stock. 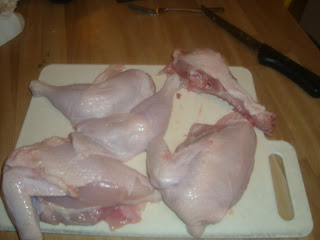 When the chickens are cut, use a knife to poke a bunch of holes in each chicken piece and, one by one, put each piece in the bowl of marinade. Now the only way to do this is to get messy. You will need to rub the marinade into each piece of chicken. Try to get some underneath the skin and inside any gaps in the meat. 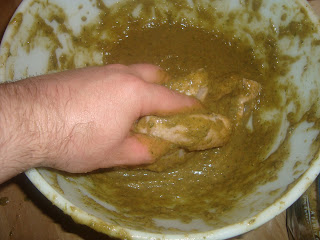 Divide the chicken pieces into 2 zip-top plastic bags, pouring the remaining marinade over the chicken. Distribute the marinade by massaging the chicken some more through the bag and let them marinate in the fridge for at least 24 hours. If you have time to do 48, even better. 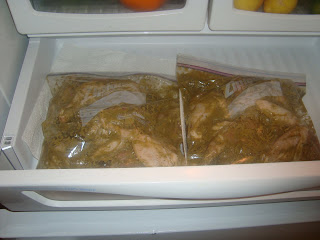 Jerk chicken should be made on a barbeque. If you have a gas grill, set the heat on medium and let it come up to temperature. On a charcoal grill it will be a little harder to control the temperature but try not to let it get its hottest. Either way, it is very important to use wood chips to generate smoke. The best method is to soak either hickory, mesquite or fruit wood chips in water for 30-60 minutes, drain them and wrap them in foil pouches with lots of holes poked in them. Put the pouches directly on the heat source just before putting the chicken on. Cook for 20-30 minutes turning several times, or until the chicken is cooked. 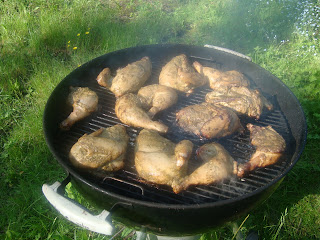 Meanwhile prepare a sauce using the remainder of the marinade if you have enough. Add some water and rum and boil for at least 5 minutes so any bacteria is killed. Now if some of you are a little more nervous about salmonella, you may want to reserve some marinade before rubbing it into the chicken and use this instead. Serve the chicken with the sauce and rice as a side. 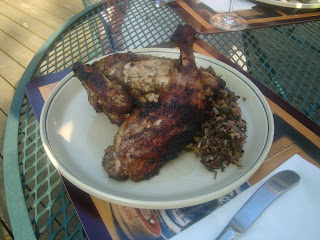 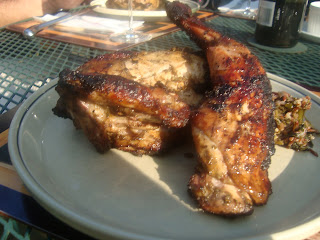