This review is of the kind of restaurant you would never know about unless you lived in the neighbourhood or did some serious research. I recently had two meals there, both excellent. 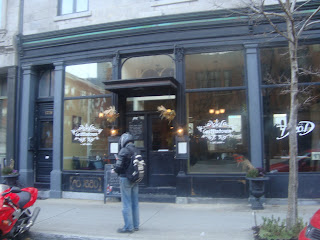 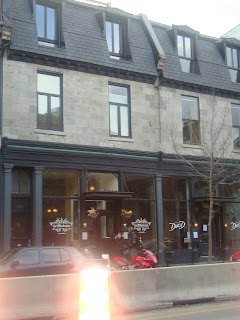 View Larger Map
Griffintown café is a small restaurant in Griffintown, a community just outside of the downtown core that used to be neglected and a little slum-like until recently. A revitalization project is currently underway and there are lots of new condo buildings and property values are rising rapidly. The restaurant itself is a small rustic style establishment that feels exactly right for a neighbourhood restaurant. One little example of the atmosphere is that they serve water in old bourbon bottles and the water glasses are fashioned after bourbon glasses, so it almost feels like you are in a saloon going on a major bender. The cuisine is American Southern style combined with some Latin/Mexican offerings. There is a TINY open kitchen in the corner that would seem unworkable for serving their capacity of about 50 people, but they seem to do a good job, and there is evidently a prep kitchen downstairs. They serve dinner 5 nights a week, lunch Wednesday - Friday, and brunch on the weekends. I found the place in search of a restaurant for a large group of family for a brunch and found some good reviews for their brunches, as well as for their regular menu. On my first visit, I went for a Friday lunch by myself to test them out. While what I had could be considered a burger and fries, it was much more than that, and quite excellent. It was a beef, lamb and duck burger, with fried fingerling potatoes. The burger was amazingly juicy, cooked nicely and the flavour of lamb was certainly evident, something you do not always get in a burger made with combinations of meat. The fries were cooked correctly and appropriately salted. They asked if I wanted ketchup mustard or mayo, but actually brought the requested condiments on the side, which turned out to be a good thing. This was because I had requested ketchup and mustard, my usual for burgers, but I tasted the burger as is first, and it turned out that, not only were the condiments unnecessary, they would have distracted from the flavour of the meat. For dessert, I had a pumpkin cake with a cream cheese creme. It was kind of like a cross between a carrot cake and a spice cake. The sauce was like cream cheese icing you would find on a carrot cake, but thinned out, to the consistency of a custard sauce. Very good. I was impressed so I reserved a table for Sunday brunch. Just note that, for groups of more than 6, brunch reservations can only be made for 10am, when they open.

We were a group of 9 people for brunch, all members of my extended family, none of whom live in Montreal. There were at least two other groups in the restaurant which, together with just a couple small tables made a full house for brunch. They feature the standard brunch items like eggs benedict several different ways, french toast, egg plates, sandwiches and salads, as well as some more unique dishes, like crab cakes, an egg dish somewhat like huevos rancheros, that they called huevos divorciados, but with more genuinely Mexican ingredients like avocado and Mexican crema, and a breakfast burger, which was a sausage patty on a bun topped with a fried egg. They make their own bacon in-house, make their own cured salmon (unsmoked) and generally try not to take shortcuts. I ordered the eggs benedict with bacon and goat cheese. Others ordered the benedict with the salmon or with the spinach. The huevos divorciados, the breakfast patty, french toast and the yogurt and granola were also ordered. While I certainly didn’t taste everyone’s plate, it was very obvious that everyone greatly enjoyed the food. The benedict was excellent. The eggs were perfectly cooked and the house-made bacon had perfect flavour. The hollandaise was flavourful and correctly made, though I would have preferred a little more, especially since the english muffins were rather thick. The goat cheese was of good quality and matched well with the bacon. It was served with a small side salad and a form of hash browns, with good flavour. I was also able to taste the house cured salmon. The texture and salt level was perfect, though I would have liked a little more flavour from herbs or citrus, as has been done in other restaurants I have worked in.

The service was very pleasant and rather competent, especially considering there were three large groups at the same time, filling the restaurant. Several in our party requested some additional sides during the course of the meal, and they were delivered quickly. For brunch in Montreal, the price was fairly reasonable, with most brunch dishes in the 10-15 dollar range. Believe me, brunch in Montreal, especially downtown, can easily get a fair bit pricier than this. Lunch prices are comparable with dinner prices a little higher, but with some very interesting dishes. I have not been there for dinner yet, but would certainly like to. They also feature live music in the evenings.

So to summarize, great atmosphere, friendly service, and great food. A hidden gem that deserves to be unearthed.