The Mega-Quarry is Dead!!


For more than a year now, from Foodstock to Soupstock, I have brought you news of the fight against a giant quarry planned for rural Ontario that would be devastating to the environment. Environmentalists, community leaders and chefs have all been involved to save this prime Ontario farmland and ensure that our land and water remains secure. 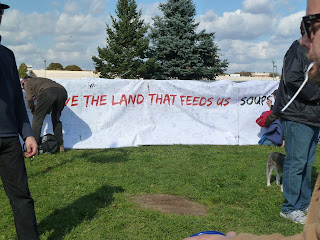 Now I have found out that Highland Companies has withdrawn their application for the mega-quarry, specifically referencing a lack of community support for the project. They also expressed displeasure that an environmental assessment had been ordered.

Victory! In an era when large corporate interests always seem to carry the day, it is wonderful and heartening to see a grass-roots community based movement take down a damaging plan from a powerful corporation. And it is clear that the end of the mega-quarry is DIRECTLY tied to these grass roots efforts.

28,000 people attended Foodstock on a remote farm on a cold and windy day last year and a similar crowd converged on Woodbine Park in Toronto last month for Soupstock. And the community groups that rallied around the cause took up as their first challenge lobbying for an environmental assessment for the mega-quarry despite the fact that provincial law did not require one. Fortunately the governing Liberal party was facing an upcoming election and decided to order one to appeal to their base. Then they survived the election and actually carried through on that promise. Now Highland finds the approval process asking many more questions and that they have no community support, so they drop the project and withdraw the application. As they still own that huge tract of land, it is not fully dead, and Highland has not ruled out applying to start a smaller quarry at some future time, still the massive impending disaster of a mega-quarry will not happen. This would not have been possible without so many people mobilizing against it and making their voices heard. 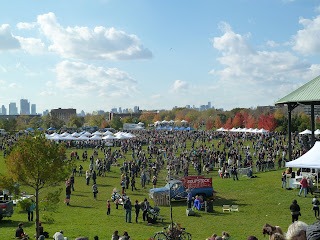 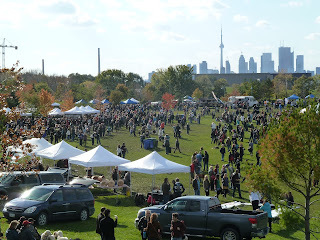 Since I never got around to reporting on Soupstock, despite attending the event, I will write a little and post a few pictures in this post. It was an absolutely beautiful day, a little warmer than average for late October and sunny all day long. This time, we had to buy tickets to get servings of soup, with 3 servings costing $10. I found that this was worth it, as each serving of soup was actually a full portion. Like last year, I attended the event with my mom, and we had about 6 servings each. As this was a month ago, my memories aren't quite as clear as I would like, but some highlights were an onion soup with braised Cumbrae Farms lamb, a hot and sour soup prepared by Susur Lee, a potato, leek, and sunchoke (Jerusalem artichoke) soup with bacon, and a peach soup with granola and yogurt. Almost every soup we had was excellent and offered something noteworthy. As this was a park in Toronto, many people brought their dogs along, which added to the friendliness of the atmosphere. 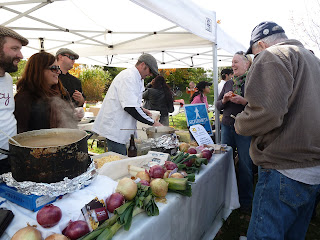 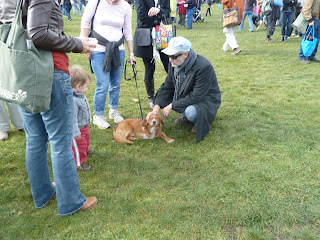 So, great news for Ontarians and all those who care about the environment and sustainability. This may not be over forever, but it still a victory and a sigh of relief.
Posted by Evan at 9:28 PM