This is another braised meat dish so it follows the general theme of my post about How To Make a Stew. But this meal is a classic in my family so I feel it deserves its own post. There are also a few modifications of the basic technique. Paprikash is a traditional Hungarian dish typically made with veal, although beef chicken or pork are often used as well. As this dish is named after the primary spice, it is important to use good quality paprika. This is not a place for smoked paprika and I would generally advise against using Spanish paprika, as it is generally of inferior quality to Hungarian. Hungarian paprika is sold in two variations, hot and sweet. The “hot” in hot paprika shouldn’t normally refer to the heat associated with chili burn, but more to the pungency. Hot Hungarian paprika is the ideal form of paprika to use for this dish. Sweet paprika will work as well, though you may want to increase slightly the quantity of cumin and (maybe) the cayenne to compensate for the relative delicacy of the sweet paprika. Of course this will all depend on the actual quality of the product. Sometimes the hot paprika can be quite spicy, though it is not supposed to be. In this case reduce (or even eliminate) the cayenne so it doesn’t get too spicy.

First brown the slices of parsnip and set aside, then brown the meat and set it aside, as described in my stew post. 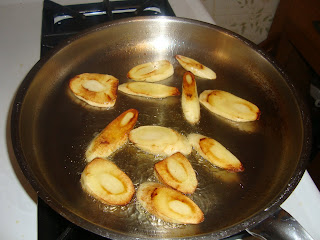 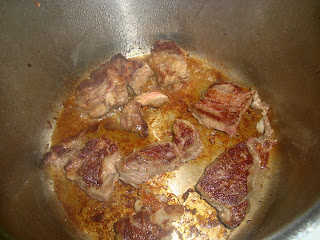 Then add the onions, carrots and celery and saute until soft, then add the garlic and cook until fragrant. Then add the tomato paste and paprika and cook, stirring constantly for about 5 minutes to open up the aromas of the paprika. Do not let it burn. Then add more oil and stir in the flour to make a roux and cook for about a minute. Then add the wine, then the tomatoes and the salt, pepper and other herbs and spices. Add the meat and parsnips back to the pot, bring to a boil and cook in a 275 degree oven for about 3 hours or until the meat is very tender. 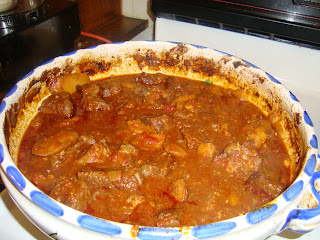 Before adding the sour cream 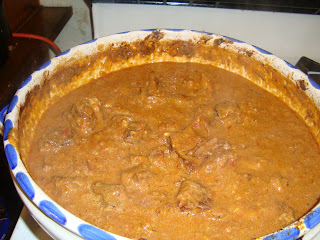 After the sour cream

When the stew is done, take it out of the oven and let it cool for about 5 minutes. Make sure it is no longer boiling. Then stir in the sour cream, one or two dollops at a time. At this point, if you bring the paprikash back to a boil, the sauce will separate and appear curdled. This won’t affect the taste but when done properly you will get a very smooth texture that boiling will undo. However, when frozen and reheated, the damage is actually not as bad as one might think, as the sour cream stays more or less emulsified. We serve this over egg noodles or another broad pasta, such as pappardelle. Other pasta will work as well, or any other starch you would normally serve with a stew. 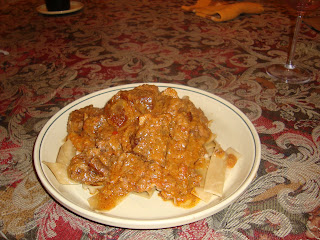