A little while ago I wrote a partial review of this establishment and now I am ready to give a full review. This is also the first review I am posting of a Guelph restaurant, mainly because I do not eat at many restaurants here. It will also be something of an analysis of poutine - what it is and what makes a good one.

Most of the reviews I have posted so far are for upscale or mid-range eateries; fast food is not something I would generally consider worthy of review. And not only would this sort of food be considered fast food, but this is also a chain restaurant, with several locations in Toronto and has outlets in several other cities in Ontario and 3 other provinces. But to me, Smoke’s is different, as they specialize in one food item - poutine - and they use quality fresh ingredients. 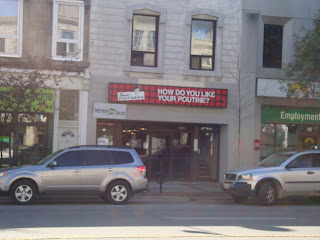 Smoke’s Poutinerie Guelph is located in the heart of downtown on Wyndham street. The area is the closest Guelph has to a sketchy inner-city area (the storefront on the right is a shelter and employment centre). But more important for this establishment it is only a few doors down from MacDonell street, which has most of the city’s bars and clubs. As poutine is considered ideal late night food for those who are drunk and/or stoned, Smoke’s is perfectly positioned to make a fortune, especially since they stay open until 4am on Friday and Saturday nights. I had already told you how, when I was there at 2:30am during Nuit Blanche, there were huge lines filling the restaurant and it was a madhouse inside. I went back recently at a much saner time and found no lineup at all but there were several customers there even at 3pm, not a typical time for people to be eating something as substantial as poutine. While on my previous visit, I stuck to the basic, traditional poutine, this time I chose from their extensive list of more elaborate topped offerings. I ordered the double pork, which uses a green peppercorn sauce and is topped with chipotle pulled pork and double-smoked bacon. These meats are also part of several other possible combinations, along with ground beef, shaved roast beef, sausage, grilled chicken, chili and even Montreal Smoked Meat. There was also a cheese sauce used on some of the dishes.

I’m not sure that there really is a perfect poutine. I say this because it was originally intended to be a sloppy, utilitarian food, and also there are inherent contradictions within the structure of the dish that seem to deter excellence. Obviously the ultimate sign of quality in a deep fried item such as fries is to be golden and crispy on the outside and properly cooked on the inside. Now the fastest way to turn fried food into a soggy mess is to smother it with a sauce or anything else wet. So in principle, gravy on fries should be a bad idea. While some restauranteurs have attempted to elevate the poutine through the use of high end ingredients such as foie gras (I’m looking at you Martin Picard!), this is a food of humble origins - a workingman’s food - so being too fancy and meticulous seems at odds with what the poutine is supposed to be. The paragon of poutine excellence is supposedly found at Montreal fast food joints and places you could only call dives. I’m guessing they don’t use fresh ingredients or make their sauce from scratch. So, can poutine fit in with attention to quality?

Let’s get back to Smoke’s. I found mostly positives with some negatives in both poutines I tried, and what I found seems to reveal something about what a poutine is, should be, and can be. First the traditional poutine was quite easy to judge as there are only three elements: fries, gravy and cheese curds. The fries were absolute perfection. Soft and tender inside, and the very first fries I could taste before the gravy soaked in were golden and crispy. It is abundantly clear they double fry using fresh-cut, not frozen, potatoes. The cheese curds were quite tasty and at just the right temperature, somewhere between melted and still intact and squeaking. The gravy was not quite what I was used to and perhaps a little too herbed and peppery, but this gave me the idea that the sauce was maybe better suited to the more elaborate choices.

The double pork poutine was quite interesting. With this version, all the meat is topping the poutine, so you don’t get any crispy fries as they are all underneath. But the advantage is the flavour of the meat soaks into the fries and creates a more balanced flavour. The pulled pork was delicious. By itself it would maybe be a little too sweet, but mixed into the poutine and combined with the double-smoked bacon, it worked perfectly. Here the gravy became a peppercorn gravy. It seemed to be the same gravy as on the traditional with green peppercorns added. But where the gravy didn’t seem to fit so well with the standard poutine, it was perfectly matched for this meat-filled version. Which was just as I thought; their recipes are geared toward the more elaborate, topped poutines. Some of the other options on the menu scared me a bit, such as the smoked meat poutine which had Montreal smoked meat, pickle and yellow mustard and nacho poutines with cheese sauce, others with chilli and so on. But this seems to be their focus, so I believe that those should be good too. 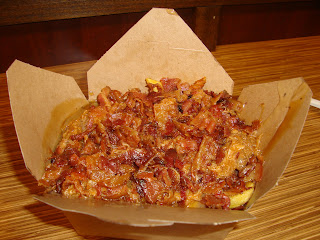 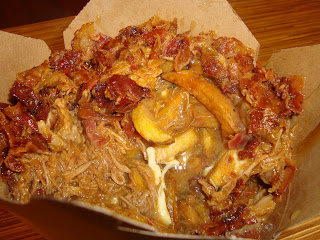 I think what I can conclude from this is that poutine is not really an example of fine cuisine, but more a greasy and comfortable mess of food that will soak up the excess alcohol (or the after affects thereof) from a night of excess. At its best poutine would not be too fancy but we can see it is certainly possible to use well sourced and fresh, local ingredients to make the poutine quite close to real food. It can be simple or baroque. In general, I tend to prefer the simple, but Smoke’s has designed their menu to highlight the more complex offerings, so there I do prefer the more elaborate choices.

Regular poutines range from about 6 to 10 dollars, with large (trust me, nobody needs to eat a large poutine) a couple dollars more. They have not only ordinary soft drinks, but some natural, locally bottled beverages as well. This is also a chain restaurant with several locations in Toronto and across Ontario and some other provinces. And I have found out that this winter they will open a location in the ultimate poutine battleground - downtown Montreal right in the middle of the city’s biggest bar scene. Overall, a fast food restaurant with a quality level quite a bit higher than usual for fast food.