Today, November 11, is Remembrance Day in Canada. It commemorates the end of World War I and, by extension, all wars and the sacrifices made by our war veterans. In recent decades Canada has not been known as a country that fights a lot of wars, but Canada has a very distinguished record of service. In the early years, Canada’s army was simply an extension of the British Army, even after independence in 1867. This changed during World War I. Canadian units were assigned many difficult missions and fought in many well known battles, particularly Vimy Ridge and Passchendaele. By the time of World War II, Canada was able to declare war separately of their own accord, rather than being automatically entered when Britain was at war. The Canadians were a very important part of the D-Day invasion and were the primary forces involved in the liberation of Holland. Canada was also active in the Korean War. From the 1960's through the 1990's Canada was not involved in any combat operations, but became known as a very active peacekeeping force within the UN, present in many war zones around the world. More recently, Canada has become involved in the war in Afghanistan, once again taking an active combat role.

In addition to my own pictures, in this post I will be using some pictures made available through the Canada Remembers project for the purpose of education and sharing with others. Pictures that came from the website will be identified as such. 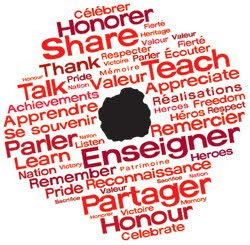 Courtesy of Veterans Affairs Canada
Canada’s symbol for Remembrance Day is the poppy, worn pinned to the lapel. The poppy is a reference to World War I and “In Flanders Fields”, a poem written by Canadian battlefield surgeon Lieutenant Colonel John McCrae. He wrote the poem in 1915 at the battle of Ypres, an area commonly known as Flanders. McCrae noted that wild poppies had already started to grow among the newly buried graves of the dead from that battle. Later that year, the poem was published in a British journal and gained instant attention. McCrae died of pneumonia in a military hospital in 1918. Starting in 1922, the Royal Canadian Legion started the poppy campaign to raise money for the legion and Canadian veterans. A major part of this that has kept up to this day is the sale of poppy pins to affix to the lapel, traditionally worn over the heart. 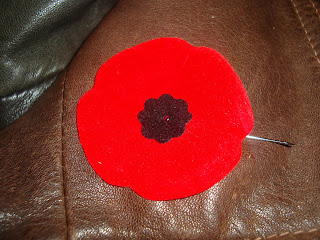 I have a special connection to John McCrae. My hometown is Guelph, Ontario - the same place where McCrae was born and raised. His home is currently a museum, the McCrae House at 108 Water St., Guelph, affiliated with the Guelph Civic Museum. The McCrae House features memorabilia personal to McCrae and general war-related items. For three years of elementary school, I attended John McCrae Public School, located 2 blocks from the McCrae house. For remembrance day, the students would go to the McCrae House and take part in the ceremonies held there. We all memorized “In Flanders Fields”, which is recited at many Canadian remembrance day ceremonies. 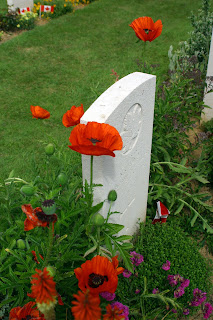 Courtesy of Veterans Affairs Canada
Today I attended the remembrance day ceremony held on the grounds of McGill University in Montreal. Normally, such services are held at the city’s war memorial, known as the cenotaph. Currently, the park where it is located, Place Du Canada, is being renovated, so the ceremonies are being held on the McGill campus, inside the main gates known as the Roddick Gates. In a way, it is very appropriate, as John McCrae studied and later taught medicine at McGill before joining the army upon the outbreak of World War I. The ceremonies always occur in the late morning, leading up to the official commemoration of the end of the war at 11am, when a minute of silence is observed. Shots were fired, and many veterans and other dignitaries laid wreaths in front of a large cross erected to stand in for a cenotaph, where wreaths are usually laid on Remembrance Day. The event was quite well attended with a good mix of military veterans in uniform and civilians of all ages. There were school groups and a large number of young people - most likely university students as this was taking place on the McGill campus. With the size of the venue and number of people present it was hard to get good photos but I was able to get a few decent shots. 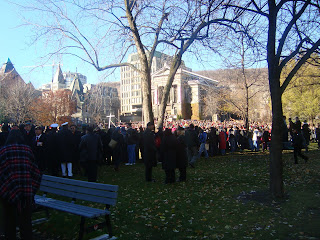 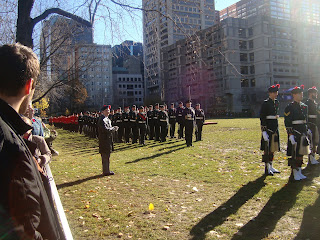 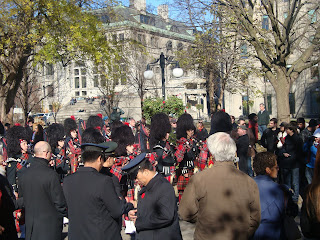 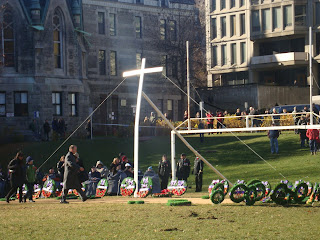 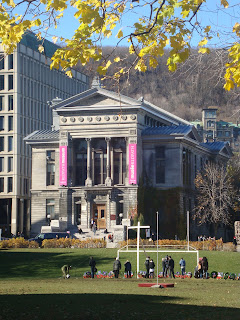 For more information about the role played by Canada’s military and more about John McCrae, visit the department of Veteran’s Affairs Canada at
http://www.vac-acc.gc.ca

Finally, I personally would like to thank the veterans and those who died serving our country. For those of you from other countries who may have served in your own nation’s military, I would like to extend my respect and admiration for the sacrifice you have made. 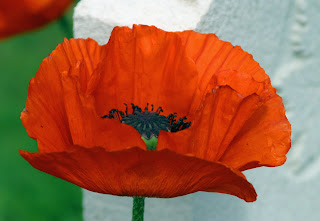 Courtesy of Veterans Affairs Canada
In closing, I present the full text of “In Flanders Fields”

In Flanders fields the poppies blow
Between the crosses, row on row,
That mark our place; and in the sky
The larks, still bravely singing, fly
Scarce heard amid the guns below.

We are the Dead. Short days ago
We lived, felt dawn, saw sunset glow,
Loved, and were loved, and now we lie
In Flanders Fields.

Take up our quarrel with the foe:
To you from failing hands we throw
The torch; be yours to hold it high.
If ye break faith with us who die
We shall not sleep, though poppies grow
In Flanders Fields.

Email ThisBlogThis!Share to TwitterShare to FacebookShare to Pinterest
Labels: remembrance