A Day Off Work

Normally it would not be my intention to write blog entries about what I did today - I leave that to other bloggers. I prefer to talk about issues and miscellany that comes to mind. Several such pieces of blog material came to me a couple days ago and they seemed to me to be vaguely connected. It just so happens that their commonalities lie in how my day went on Tuesday. So, here we go. Another new experiment today is that I will be adding pictures to this post. I’m not sure I will do this very much but this piece seemed to warrant them.

I generally go to sleep in the wee hours of the morning and wake up about midday (this schedule changes when I work morning shifts, though this rarely happens more than twice a week). So I woke up midday, got ready for the day and in the afternoon, watched the World Cup Semifinal between the Netherlands and Uruguay. Great match, and the Netherlands may have what it takes to win it all - one more game to go. Yesterday in the other semi-final, Spain defeated Germany 1-0, setting up a Netherlands - Spain final. For the last several years, both the Netherlands and Spain have entered the World Cup with great promise only to fizzle out in the early stages. This time, one of these teams will finally win it all for the first time ever. I sensed that the Netherlands might make it all the way when they won every game out of their group. I like the Dutch style of play while I found the Spain - Germany game very dull until the final 30 minutes and, since my home country is not competitive, I have to find other countries to support. Hopefully one day Canada will field a decent squad but for now, our team is very weak. They exit very early in qualifying and the best soccer player Canada has produced plays for England (Owen Hargreaves). The situation is a little baffling since soccer is very popular as a youth sport at the grassroots level and has been for many years now, yet there is no improvement in the national team and there are not many Canadians going to play for top-level teams in Europe. Now with the expanding MLS there may be hope. Toronto has a team and Montreal will be entering the league in 2012.

After the game, I went downtown. It was the last day of the Montreal Jazz Festival and the closing show was something I wanted to see. The last three days (including Tuesday) have been extremely hot and humid (34 degrees C, 42 with the humidity) so it felt like walking through soup. The theme of the closing concert was Mardi Gras in Montreal, so the event began with a parade through the downtown to the festival site. Here I noticed a huge difference between this parade and the Canada Day parade I attended last week that followed much the same route. First of all, there were far more people at this parade. At the end of the parade, there were so many people the sidewalks and the plaza behind it were completely impassible. All along the route the crowd was at least three or four deep. The other big difference was that the marchers and the floats were far more impressive. Some were even transported from New Orleans for this event. Last week, I blamed lack of public financing for the shabbiness of the Canada Day event, but the Mardi Gras parade is almost all privately funded through ticket sales to indoor shows and concession sales outdoors. So it seems the real answer is that Quebecers don’t seem to care about Canada Day enough to attend or support the parade. 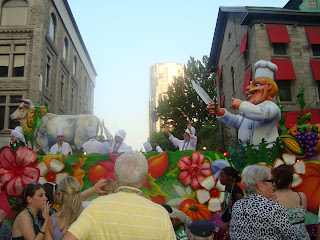 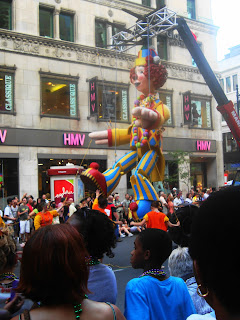 After the parade the concert began. The first performer was Zachary Richard. The most interesting thing about the performance was that he played the zydeco. A zydeco is similar to an accordion and is very popular in New Orleans music. What I find fascinating is that the crowd really seemed to enjoy this, including me. At the same time, accordion music is considered very unpopular and I personally do not care for it. How is it that two similar instruments generate very different audience impressions when played? The only answer I can think of would be that the zydeco has become part of the signature sound of New Orleans so people recognize and appreciate this music. Also, the accordion is often played at a slower pacing than the zydeco and faster paced music tends to be more popular than slower music. 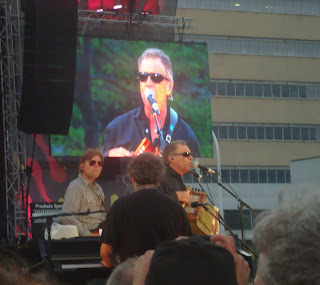 There was one other happening worthy of note. The opening act, Trombone Shorty, was very popular with the crowd and, when the headliner, New Orleans legend Alan Toussaint, came on, many people left. I do not recall going to a concert where people came only to see the opening act and not the headliner. It may be somewhat of a generational thing, since the opening act was in a more modern style and may have had more appeal to contemporary tastes. My own opinion was that they were both excellent and Mr. Toussaint deserved a larger crowd than he ended up receiving (though there was still a very large crowd). This is not really a complaint or castigation, I simply found this to be interesting and am not attaching any judgments to this. I suppose this is what the entire post was about. It was just an interesting day, without any big issues to think about but rather a few smaller ones.
Posted by Evan at 4:59 PM